RWU’s unique and intimate Music program layers the exploration of world cultures on top of a solid foundation in theory, history and composition. All Music students take private lessons, perform with an ensemble and specialize in either technology or culture. With opportunities to take additional coursework in professional fields like business, communication or computer science, you’ll be prepared for a wide range of music careers.

The Music major at Roger Williams University offers a solid foundation in music theory and the principle musical styles in western culture, as well as an introduction to the music of various world cultures. Students study the elements of music and explore their application in various compositional formats. They have the opportunity to study the evolution of popular music as well as the classical forms that have characterized and helped define western culture. A unique aspect of RWU’s Music major that reflects the mission of the University is the exploration of world cultures through music. These courses will focus not only on the music of various world cultures, but also on the ways in which music is a reflection of these cultures.

The Music Major offers two tracks for students to choose from. The “Music & Culture” track highlights performance and world culture through music, and the “Music & Technology” track explores 21st century developments in music, as influenced by new electronic and computer technologies.

Performing Ensembles
While enrolled at RWU, Music majors will study voice or instrument in private lessons and perform with one of the department’s ensembles. Both the Instrumental Ensemble and the Chorus are conducted by members of the Music faculty. The RWU Chorus performs a varied repertoire of classical choral works along with musical theater and popular styles. Both ensembles perform at the end of each semester in the RWU Performing Arts Center.

Preparing for a Career
Students in the Music major are encouraged to take advantage of other unique opportunities offered at Roger Williams University, with its strong professional schools that complement the liberal arts curriculum. By adding a minor in Business, Communication or Computer Science, students can prepare themselves for many new opportunities in the field of music beyond the traditional spheres of performance and composition.

To read more about our academic offerings, or to view full course descriptions, please refer to our University Catalog.

3.      Employ critical listening skills and knowledge of musical elements to identify and describe styles within their historical and cultural contexts.

4.      Function effectively in an ensemble context.

5.      Understand and appreciate the diversity and commonalities of musical styles worldwide, including the impact of technology and globalization. 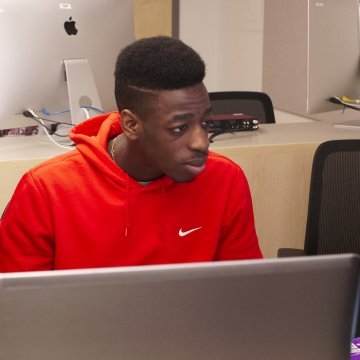 At RWU, we encourage you to pursue your interests with another major or minor that will give you an edge on your career path. Reggie Estinvil, a senior from Holbrook, Massachusetts, is a perfect example.

Learn More About the 3+3 Program