From Research Scientist to App Developer

Ever since forging an original research project her freshman year, Honors Program member Gabrielle Bailargeon continues to surf a tidal wave of success.

Baillargeon’s intrepid research goals and skills led to her being selected for a Research Experience for Undergraduates (REU) and receiving a highly competitive scholarship from the Marine Aquarium Societies of North America (MASNA), all before entering her junior year.

“I feel very lucky,” Baillargeon said. “The REU doesn’t usually get given to sophomores and neither does the MASNA scholarship. I also got involved in research starting my freshmen year, which isn’t unusual at RWU, but the type of research I was doing is.”

With no such guide currently in existence, Baillargeon is developing a mathematical model for a smartphone app that predicts the sustainability of marine ornamental fish species in the marine aquarium trade. Her model will generate sustainability rankings of fish so that consumers can make better informed decisions, with the goal of improving sustainability within the trade. This model development led Baillargeon to the REU this past summer.

At the REU, she studied the functional response of rock crabs and how they impacted fishery management policy. While here, she learned valuable skills to help further the development of her own research, such as the challenges of working with live animals. This experience also opened her to exploring fishery research­, math modeling and field research.

“The most valuable skill I can take back with me is the way of thinking and approaching questions,” Baillargeon said. “Just looking more towards the future and seeing how every little thing I do in a project affects the larger picture.” 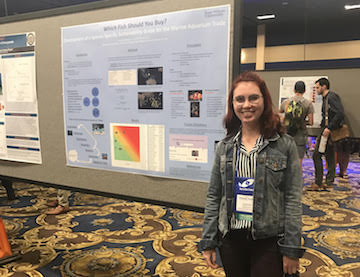 To further progress her research, Baillargeon attended the annual MACNA conference in Las Vegas last month, as an undergraduate student scholarship recipient. She connected with people in the sustainability and marine aquarium trade industry, people whom her project and app would directly impact. Talking with them motivated her to develop her model to be as accurate as possible, which led her into deeper work on the design portion of the project, she said.

Even though this is an independent research project, there have been key faculty members that have helped Baillargeon with the research and app development along the way. She’s had guidance from Associate Professor of Marine Biology Andrew Rhyne, who is one of the leading scientists in quantifying and mapping the marine aquarium trade. Rhyne helps Baillargeon select certain factors to use as well as ensuring the model is generating the right outputs. And when parts of the mathematical model required knowledge of coding, she turned to Assistant Professor of Mathematics Robert Jacobson, who has expertise in the area.

“With this project I came into it only having the idea of the end goal: creating an app that would be a consumer guide for aquarium trade fishes, but I had no road map to get there,” Baillargeon said. “I certainly feel like I’ve gotten true research experience that a ‘real scientist’ would because I’ve had to overcome many problems in order to get to my end goal.”

Baillargeon will continue her scientific journey by presenting her research at the 2018 National Collegiate Honors Council conference in early November.