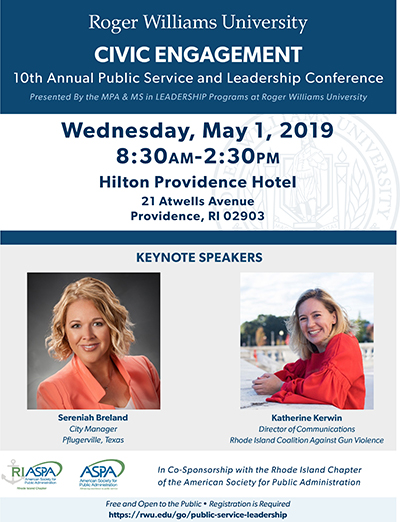 The conference will be on Wednesday, May 1, 2019. Following this year's program theme, “Civic Engagement," speakers and student panelist are preparing presentations from a number of perspectives that touch on Civic Engagement.

We are pleased to have as our keynote speaker, Ms. Sereniah Breland, City Manager of Plugerville, Texas, one of the fastest growing regions in the country, who will share some of the exciting ways public and private organizations have joined together to strengthen the bonds of “community” through active civic engagement. Before becoming the city manager of Plugerville, and the first woman to hold the post, Ms. Breland was city manager in three other communities. The depth of experience she brings from those roles has enabled her to inspire audiences to create better versions of themselves through intentional community engagement.

In addition to Sereniah Breland, conference keynote speaker will include Katherine Kerwin, Director of Communications for The Rhode Island Coalition Against Gun Violence, Paul Danczyk, President-elect of the American Society for Public Administration (ASPA), and William Shields, Executive Director of ASPA.

High School students from the Pawtucket Academy will also present their group research projects on Civic Engagement. As part of a collaboration between the Pawtucket Academy and the university, RWU staff mentors the students in developing and preparing their presentations for the conference. These projects help the high school students develop a host of skills that are increasing important in the professional world. Skills that strengthen their communication and learning to collaborate with each other to build teamwork. As a result of their hard work, the high school student will be inducted as members of ASPA (American Society for Public Administration).

The event will provide networking opportunities with distinguished members of the community, RWU students and staff and RI Chapter members of the American Society for Public Administration.

* Registration is now closed; the conference is fully subscribed. To be added to the waitlist, please email Hlee Kue. 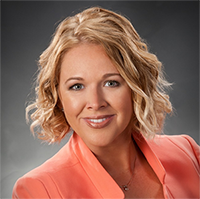 Sereniah Breland was recently appointed as the City Manager of Pflugerville, Tx. In her most recent assignments, she served the cities of Alvin, Tx, Guthrie, Ok, and Goliad, Tx as their City Manager. She began her career in local government in 2003 as an Assistant to the City Manager in Greenville, Tx through the Urban Fellowship of the North Central Texas Council of Governments which led her to Denton, Tx and then Sugar Land, Tx as the Support Services Director. Additionally, Breland was named “Top 5 Public Servants” in 2012 by the Victoria Advocate based on recommendations from community leaders. She is the peer elected “Director at Large” for the Board of Directors for Texas City Management Association (TCMA) and has served in many other roles for various professional organizations such as City Management Association of Oklahoma, International City Management Association, United Way, YMCA, and Oklahoma Municipal League.

Prior to entering the field of local government, Breland taught Government and Economics at the high school level in Garland and Mesquite.

Breland received her Bachelor of Business Administration degree from Stephen F. Austin State University and a Master of Public Affairs degree from the University of Texas at Dallas. During time away from public service, she enjoys kayaking, giving high fives, music, cycling, the outdoors, and reading. 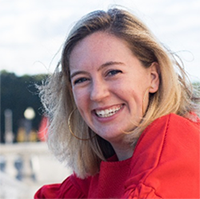 Kat Kerwin is a Providence, R.I., native and the youngest person serving on the Providence City Council. Kat was hired as the first and only employee of the RI Coalition Against Gun Violence, a non-profit advocacy organization with a mission of passing gun violence prevention legislation in Rhode Island. Kat’s role includes lobbying at the Rhode Island State House for gun safety bills, organizing events rallies and actions, handling all communications for the organization. Kat also secured a 165,000 grant from an individual donor that facilitated a city wide youth engagement campaign around gun violence prevention. The campaign trained over 100 youth in de-escalation and peace strategies, sent over 50 youth to Washington, DC for the March for Our Lives event, and created a new campaign: Counselors Not Cops, with the goal of divesting in police in Providence schools and investing in social/emotional support in Providence schools.

Kat is a senior at the University of Wisconsin where she plans to graduate in May. I will be receiving a degree in Geography and Political Science.

Paul Danczyk, PhD, is the Director of Executive Education in Sacramento for the University of Southern California Sol Price School of Public Policy.

In his current capacity, Paul designs, coordinates and presents in leadership and management programs – impacting national, state and local governmental and nonprofit organizations – and teaches master-level classes in California and, previously, Mexico. He is an executive coach, working with over 200 public sector executives, and cofounded and is the lead architect of www.LeadershipEnergizes.com.

He and his wife are raising two sons. Paul enjoys landscaping, creating sculptures, painting, and bee keeping. He can be reached at danczyk@usc.edu.

Bill Shields became Executive Director of the American Society for Public Administration, the largest and most prominent professional association for public administration, in January 2014. During his tenure, Shields has significantly broadened the Society’s professional development programming, strengthened its more than 50 local chapters and 30 subject matter sections, revitalized its operations and enhanced the quality of its communications. He also has recommitted the Society to its core mission of advancing excellence in public service and made considerable inroads in partnering with like-minded organizations on a wide range of activities.

Shields brings to his current position more than 15 years of executive and management experience in the non-profit sector, most recently as Vice President of the National Low Income Housing Coalition, the nation's leading public policy organization dedicated to ensuring that people with the lowest incomes have affordable and decent homes. In this role, he was responsible for the organization’s operational, financial, membership, outreach and fund development functions.

For more than a decade, Shields held senior management and research positions at the National Academy of Public Administration, a congressionally chartered organization established to assist government leaders in building more effective, efficient, accountable and transparent organizations. As Vice President, Chief Operating Officer and Director of Communications, he worked extensively with the Academy’s 500 elected Fellows, the nation’s top leaders in the study and practice of public administration. He served on research teams studying organization and management issues at the U.S. Departments of Defense, Housing and Urban Development, and Transportation. He edited more than 50 Academy panel reports on issues ranging from federal compensation issues to FBI reorganization.

Shields also served as Director at the Chief Executives Organization, a non-profit organization of 2,000 chief executives around the world, and in the Executive Office of the Mayor of Providence, Rhode Island. He earned his M.A. in Government and B.A. in Journalism from American University, where he has been an Adjunct Professor since 2000. In 2015, he received the School of Public Affairs’ Award for Outstanding Teaching in an Adjunct Position. Shields lives in Washington, DC with his wife and daughter.

An accomplished executive and effective leader, Janice Lachance is the Executive Vice President for Strategic and Operational Excellence at the American Geophysical Union (AGU), a professional society of more than 60,000 Earth and space scientists working in 110 countries. Her work at AGU includes management of the renovation of the organization’s 62,000-square-foot headquarters into a net-zero energy consumption building – the first renovation of its kind in Washington, D.C.

Prior to her work in the not-for-profit sector, Janice was nominated by President William Clinton and unanimously confirmed by the U.S. Senate as the Cabinet-ranked Director of the U.S. Office of Personnel Management, the federal government’s independent human resources agency responsible for all policy and programs affecting the 2.1 million members of the nation’s civil service. Janice also served as Chair of the National Labor-Management Partnership Council, a member of the President’s Management Council, and a member of the President’s Council on the 2000 Presidential Transition. Prior to becoming Director, Janice served as OPM’s Director of Communications and Policy, Chief of Staff, and Deputy Director. Janice is credited with numerous seminal achievements at OPM, including: reformulating the agency’s mission and strategy as well as re-engineering its 3,700 employee organizational structure and culture; expanding the Family and Medical Leave Act to permit the use of sick leave to care for a newborn, adopted child, or ailing family member; instituting affordable long-term care insurance for federal employees, members of the armed services, and retirees; making innovative and cost-effective improvements in health insurance and retirement programs; dramatically increasing outreach and recruitment efforts to first-job employees from underrepresented populations; and, establishing USAJOBS.GOV, the Federal Government's official source for federal job listings and employment opportunity information which attracts more than 20 million visits annually. As a cabinet-ranked member of the Clinton Administration leadership team, Janice was appointed by the President to lead five US diplomatic missions, including to the Republic of China, the People’s Republic of China and Israel. She was appointed to serve as a Commissioner of the White House Fellows program, as Chair of the National Labor-Management Partnership Council, and as a member of the President’s Management Council.

Her experience in the not-for-profit sector includes service as the Interim Executive Director of the American Library Association’s Washington Office, where she served as chief strategist and spokesperson for America’s libraries and their users before Congress and the Executive branch of the federal government. Prior to her work at ALA, she was Interim President of the Better Business Bureau Institute for Marketplace Trust, the BBB foundation implementing programs in consumer protection, financial literacy, organizational and leadership ethics, and research based on the BBB’s proprietary data. She navigated a successful leadership transition as Interim President and CEO of the Society of Consumer Affairs Professionals International, which represents a global profession of best-in-class customer care experts across all industries. Before her service at SOCAP, she served as CEO of the Special Libraries Association for more than 10 years, leading the global association of 8,000 librarians and information professionals and their business partners located in 75 countries.

A leader in her profession, a dedicated volunteer and trusted advisor, she is the President of ASPA - the American Society for Public Administration, a Fellow of the National Academy of Public Administration, a Fellow of the American Society of Association Executives, and a member of the Board of Directors of the Wise Giving Alliance.

Born and raised in Biddeford, Maine, Janice graduated from Manhattanville College and earned her law degree from Tulane University. She is admitted to practice law in the State of Maine, the District of Columbia, and the United States Supreme Court.

She can be reached at janice@JaniceLachance.com