Before he was the founding father of Rhode Island, Roger Williams was a visionary, a revolutionary, a radical and a rebel. His advocacy for religious liberty, equality and a government free of religion forced him to flee persecution from his native England and then cost him exile from colonial Massachusetts. 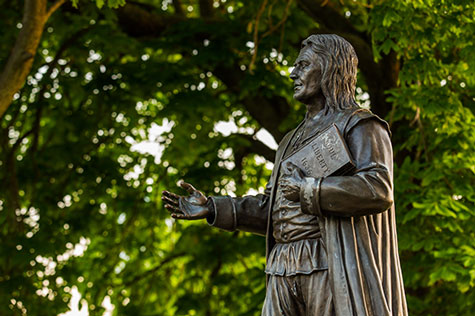 His threatening views? A devout minister, he believed that all people had the right to worship as they chose without fear of oppression and, therefore, government had no right to compel a person to worship in a certain way – or to worship at all. Banished by Massachusetts into the bitter January wilderness, Roger trekked more than 80 miles through knee-deep snow, with little more than a compass and corn paste to sustain him, until he came to the land he would call Providence and his home.

In founding Rhode Island in 1663, Roger revoked many of his society’s norms. He established the “separation of church and state” by removing religious doctrine from governance of the colony. As the first true democracy in the modern world, he gave each head of household an equal vote – including women – and granted the citizens the power to endow the government with its authority. On his most revolutionary idea, Roger said, “I infer that the sovereign, original, and foundation of civil power lies in the people.”

Even more radical to some, his beliefs on equality extended to the Native Americans and enslaved people. He publicly rebuked the King of England’s claim that “unoccupied” land in the New World was free for the taking. Claiming that the natives were the true owners of the land, he purchased Providence in deed and goods from the Native Americans in what historians believe may have been the first legal deed entered upon in the New World. And nearly 200 years before Emancipation, he was part of a movement that briefly outlawed slavery in Rhode Island.

But those very same “dangerous opinions” that threatened Roger with persecution served as the basis for revolution a century later, and nurtured the ideals of religious liberty, independence of thought and freedom of speech that would take root in American soil. Many of the principles forged with the 1663 Rhode Island Colonial Charter found their way into the United States Bill of Rights and the U.S. Constitution.

Some historians argue that he is the forgotten Founding Father. In any case, Roger was an American Original and his legacy serves to inspire, inform and guide the ideals to which Roger Williams University dedicates its mission and purpose.

Learn About Our History