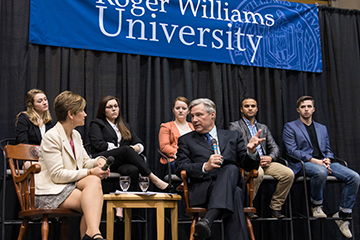 The Center for Macro Projects and Diplomacy fosters the interdisciplinary formulation, design, demonstration and debate of large-scale project proposals that can contribute to human progress through the improvement of world habitat.

The Center is inspired by the work of Frank Davidson, best known as co-founder of the English Channel Tunnel Study Group in the 1950s, and participant in large scale undertakings from the U.S. Civilian Conservation Corps of the 1930s and 1940s, to MIT's Macro-Engineering Research Group from the 1970s to the 1990s. Davidson was awarded a 2003 Honorary Degree from Roger Williams University, and is a member of the university’s Board of Overseers.

“The perception that development and conservation are separate endeavors is at the heart of current conflict and violence between cultures. A vision balancing creation and conservation is needed, in projects of a broad and inclusive scale, to provide a way forward in world affairs.”