“I Wanna Dance with Some Hawks:" An RWU Lip Dub Video

BRISTOL, R.I. – There was an unmistakable musical quality in the air of the Recreation Center last Thursday night. Pockets of students gathered throughout the building, all wearing their respective team jerseys or organization t-shirts, all testing each other’s knowledge of the lyrics to “I Wanna Dance with Somebody” by Whitney Houston.

The plan: Organize a route through the building, featuring students from different teams, organizations and clubs, all lip-syncing to the song.

“In my short time here, I haven’t seen anything like this.  High energy. It was contagious. It was fun,” said Kiki Jacobs, Director of Athletics.

Student leaders Lexi Dubovick ’21 and Haley Watt ’20 of the ICC wanted to partner with athletics and the Student Athlete-Advisory Committee (SAAC) as they planned for their annual Spirit Games, said Sean Ballard, Assistant Director for Student Programs, Leadership & Orientation.

“SAAC president, Anna Vasaturo ’20, really pushed this information out to all of our SAAC reps,” said Jennifer Fox, Head Coach of Women’s Lacrosse and Manager of Fall Sports Events.

Jacobs and Emmert credit the project as Fox's brain-child, who had facilitated a similar activity at a previous institution. The team of students and staff met to discuss timelines and make sure they tried to collaborate with as many groups as possible.

“As Matt kept saying ‘If you build it, they will come!’,” said Fox. 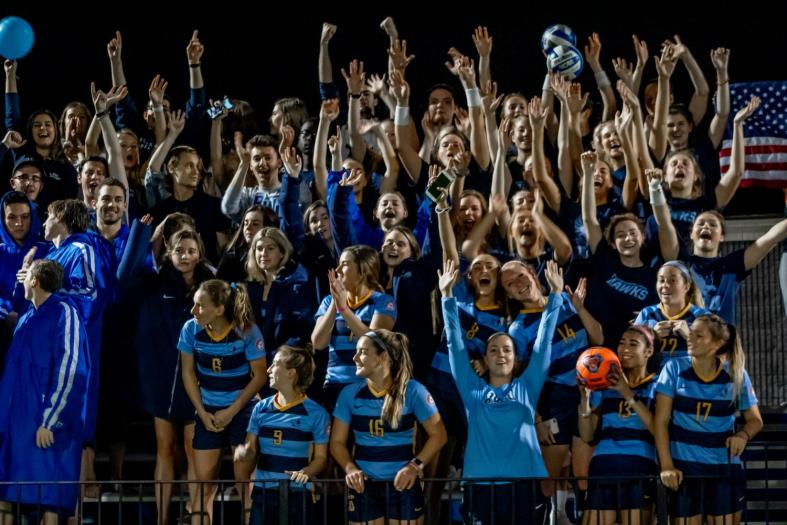 “The student response was amazing. We had almost every single organization represented in some capacity and had a good number of clubs show up as well. Everyone was energized and ready to go,” said Ballard.

Assistant Athletic Communications Director Casie Beauchemin worked behind the scenes coordinating these large groups of people throughout the building and bringing together the finale. For that, you’ll have to watch the video!

“This is my eighth year at RWU and I have never witnessed or experienced that type of energy and excitement from that many students and from so many different facets across campus," said Emmert. "It was easily my most memorable experience as a Hawk and one I know the students who participated will cherish forever.”