Superhero Course a Fun and Surprising Way to Learn About Politics

In her 'Great Powers and Great Responsibilities' course, Annika Hagley uses the superhero genre to dive into conversations about politics, culture, and society.

BRISTOL, R.I. – As Annika Hagley stands in her office in the College of Arts and Sciences building, she shares a story she’s heard from multiple students: whenever they’re having a tough day, they walk by the CAS building, gaze at the stained-glass Captain America shield hanging in her office window, and think “What would Steve Rogers (Captain America) do?”

Hagley, associate professor of Political Science, teaches the popular course “Great Powers and Great Responsibilities: Superheroes, Politics, Society and Identity,” a capstone for the University’s CORE curriculum, in which students study well-known superheroes and their connections to politics and society.

Now in her eighth year at RWU, Hagley said she teaches this course about once a year, usually during winter intersession or over the summer. “It’s never not been full,” she said.

In class, students analyze both DC Comics and Marvel Comics superheroes, from Superman and Captain America to Wonder Woman and Black Panther, looking at their backstories, their evolution over the decades, and how they relate to politics and current affairs.

Superheroes are an “effective tool to reach students about really difficult (topics). This is a really important way to expose people to ideas they would never come across, ranging across the political spectrum.”

The superhero genre is a great vehicle to explore domestic and international issues by making these topics more accessible to students, said Alexander Rebelo, a senior Political Science major and History minor who will attend George Washington University in the fall to pursue his master’s in security policy studies.

“It’s a vehicle to explore a lot of different topics and bring attention and light to things people might not know about, in a fun way,” Rebelo said.

Students read primary superhero texts and graphic novels and watch superhero movies to explore how their distinct identities reflect certain marginalized groups and notions of “other” and to understand the ways in which the genre ties into several academic fields of study, according to a course description. Students also study critical theory as it relates to the superhero genre drawn from fields of psychoanalysis, film studies, philosophy, queer theory, critical race theory, feminist theory, science, aesthetics, religion, and politics.

The course begins with a discussion about the importance of telling stories and how “we create stories to help us process what’s happening (around us),” Hagley said. The first text students tackle is DC's Superman, who’s the “first recognizable superhero in the genre,” originally published in the late 1930s. As the story goes, Superman, born on a fictional planet called Krypton, was sent to Earth as a baby to escape the destruction of his home planet; he was found and adopted by an American couple who named him Clark Kent. His backstory easily ties into discussions about identity and immigration, Hagley said. 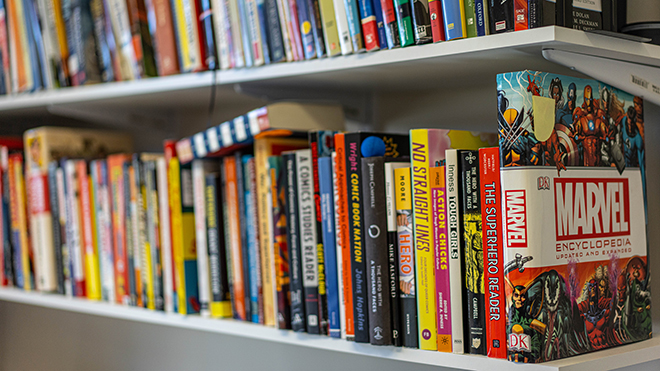 Two types of students take Hagley’s class: those who love superheroes and those who know nothing about superheroes. Both are “surprised at the depth of what we do,” she said. “They’re not expecting it.”

Superhero texts, while fun, are also rich with political and social commentary, so they offer an accessible way for students to learn about “radical discourses,” Hagley said. Many topics that dominate the conversations in modern society – race, feminism, immigration, gender and sexuality, politics, religion, and more – can be daunting to students who may not know how to engage in discussions about these topics.

“These conversations, to young people, are threatening,” she said. “To take these seemingly scary conversations and put them in a character they love or know, it’s a very effective way to give them access to have a conversation.” 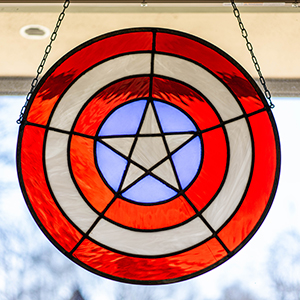 Hagley’s favorite part of teaching the class is introducing these discourses to her students and watching them become open to these ideas throughout the course. “It’s fun,” she said.

Just as Superman aids in discussions about immigration, DC’s Wonder Woman, an Amazonian warrior who first appeared in the early 1940s, serves as a vehicle for talking about feminism. Marvel's Blank Panther, the first Black superhero in mainstream American comics, published in the mid-1960s, offers a way to talk about race.

Bethanie Gartner, a senior Criminal Justice major and Creative Writing minor, who plans to pursue her master’s in Criminal Justice at RWU, said she learned more about American politics and culture through the lens of superheroes.

“It was fun to geek out on all the superheroes I love while getting to learn,” she said. “I was surprised by the types of politics that were embedded into these stories. It was enlightening to look at politics that way and see a new side of a superhero. I like them even more knowing more about them.”

Jacob Johnson, a senior Creative Writing major and Film Studies minor, said he knew a lot about superheroes before taking the course during this past winter intercession, but he still learned a lot. “I knew that comics were capable of being political, but I didn’t know it was quite so pervasive,” he said. ­

Johnson has been waiting for a while to take the class because it kept filling up, he said. “I’ve been looking forward to taking the course ever since I heard it existed,” he said. “I think anyone who is even remotely interested in the topic should take this class.”

Rebelo, who had no prior knowledge of the superhero genre, said the title of the class intrigued him. “Superheroes and politics sounded like an interesting combination. I wanted to see what that would entail,” he said. “It’s an interesting mechanism to explore politics.”

Students in the class had a wide range of majors, which Rebelo said he enjoyed. “It wasn’t just (Political Science) majors debating things,” he said. The class taught civics lessons to students “without having to bore them to death with a textbook. That was a powerful thing about it,” he said. “I have a newfound respect for superheroes and the way pop culture is able to deliver these issues to a wider audience.”

In some classes, Hagley has had students create their own superheroes and share them at the end of the semester. “The best two classes are where they share about these,” she said. “They’re sometimes cheesy, sometimes heartbreaking. Some are hysterically funny.”

By creating an environment that promotes both trust and fun, students “can really surprise you,” she said.

More Than a Passion Project

Hagley, who’s from the United Kingdom and moved to the United States in 2005, started this course in 2015. RWU “is a great place if you have a weird little passion like this,” she said. “No one has ever said, ‘This is silly.” They said, ‘Go for it.’”

In 2020, Hagley and co-author Michael Harrison published a book, “Reborn of Crisis: 9/11 and the Resurgent Superhero,” which Hagley said essentially serves as a textbook for the superhero class. In the book, they look at superheroes in film and popular culture as a lens for examining American culture and politics from 9/11 to the present. Each chapter focuses on a different superhero. 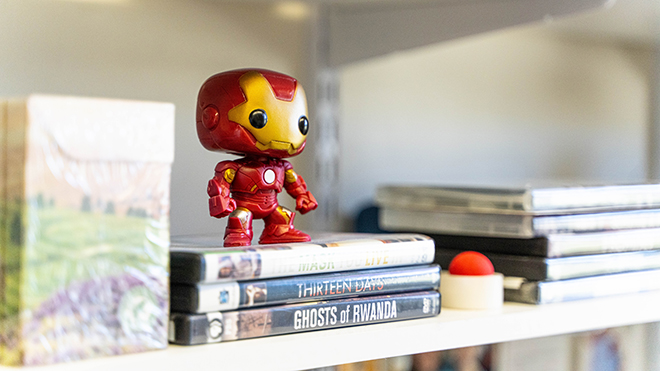 “I loved superheroes when I was a kid,” she said. Her grandfather introduced her to Captain America, who’s become her favorite “because he’s not what people think,” she said. He’s honest about America and evolves with the nation, she said. “He’s so interesting.”

“She’s a really good teacher,” Gartner said. “She makes sure that she goes over every single detail and that everyone understands it.”

Johnson said that working with Hagley “was a delight.” Rebelo admired her enthusiasm and knowledge for the subject, he said.

“I have the best job in the world,” Hagley said. “I am surrounded by young people who are … wonderful, beautiful, funny, inclusive. That really comes out in this class.”