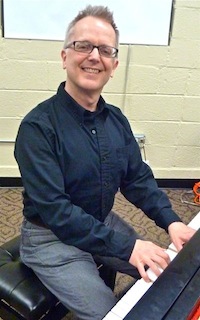 Baritone and keyboardist, Vaughn Bryner, teaches voice lessons and piano lessons at RWU and has music directed four musicals with the RWU Theatre. Bryner has been active as a teacher and professional performer for over twenty-five years in genres including classical, standards, rock, pop and church music. Bryner has sung many solo roles as a classical baritone with opera and oratorio companies from the Midwest to the Eastern Seaboard and New England; has sung music theater in numerous productions; and has held a number of regular gigs as a singer and keyboardist performing standards in lounges, restaurants and country club dining rooms.

Conducting credits include music director of many music theater productions, chorus master/conductor of operas and music director/organist positions at several churches. In addition to his classical vocal credentials, Bryner has studied with internationally renowned Broadway and Pop/Rock voice teacher, Jeannette LoVetri, since 2006 and has been certified in her method of teaching contemporary commercial (popular) styles of singing. His students have included successful professional rock, pop, jazz, music theater and classical singers. Bryner has also taught at Ball State University, Manchester College, The Studio for Singing Actors, and Fergus & Clark Academy for the Performing Arts.