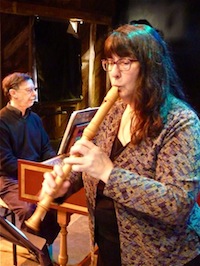 Assistant Professor Catherine Hawkes has been with the Music Department since 2006.  Her varied interests have led her down a winding career path, including stints in educational evaluation, as executive director of a concert series, and as Assistant Director of Collins LLC, one of the oldest and largest university living-learning centers in the nation.

During the 1980s, she was a founder of both the early music quartet Melusine and the Smiling Dog Band folk orchestra and in the 1990s was producer and music director of the Pan Twilight Circus.  Her interest in Medieval and Renaissance music led her to Indiana University’s Early Music Institute, where she worked with Thomas Binkley of the Studio der Frühen Musik and with Eva Legêne.  She studied recorder and Baroque flute, earning two performance degrees:  an M.M. with a concentration in Recorder Pedagogy and a D.M. in Operation of Early Music Programs. Studio work in Fine Arts Textiles also earned her a doctoral minor in that field. 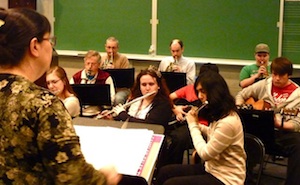 While at IU, Catherine was a producer for Focus Records and wrote several seasons of the Public Radio program Harmonia.  She has appeared on numerous North Star recordings as well as with her late Indiana bandmate Sophia Travis on recordings of Sophia’s original pop music.  She founded and directs the RWU Music Department’s Instrumental Ensemble, Treble Makers jazz combo, and Collegium.   Catherine currently plays with the Sam Hill Trio on mandolin, recorder, and tromba marina, and with Enigmatica mandolin ensemble on mandola and as recorder soloist.