Item of the Month

Each month the Archives and Special Collections will be sharing a digital image and description of an item from its collection, including books, manuscripts, letters, photographs and ephemera. To schedule an appointment to see the item in person or for more information, please email me.

Facsimile: Handwritten protest (1680) by Roger Williams against the unofficial calling of a meeting, from the Early Town Records of Providence.

Original protest is held at the Rhode Island Historical Society. 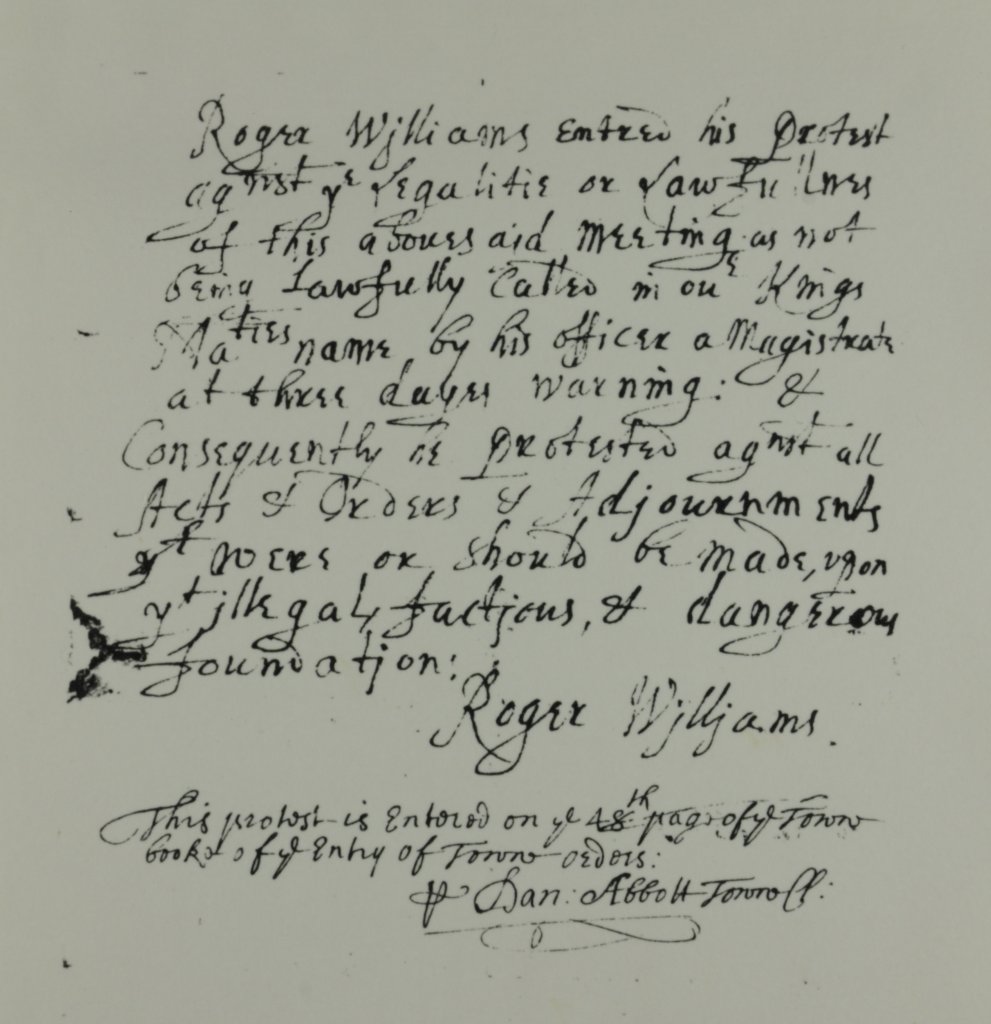 Roger Williams' A Key into the Language (1643) and more 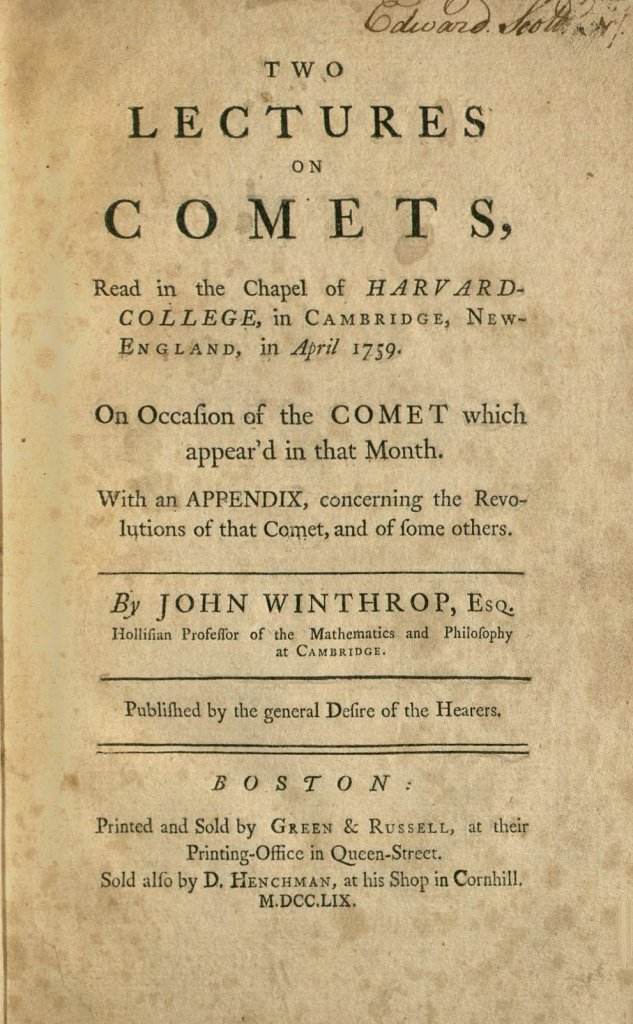 John Winthrop (1714-1779) was a distinguished mathematician, physicist, and astronomer and the 2nd Hollis Professor of Mathematics and Natural Philosophy and Harvard College. The great-great grandson of John Winthrop, founder of the Massachusetts Bay Colony, this John Winthrop was one of the foremost men of science in America during the 18th century and had a major influence on Benjamin Franklin and other prominent individuals of the period.

In April 1759, he delivered two lectures, the first on the return of Halley's comet of 1682, which was the first predicted return of the comet. In a second discourse during the same month, he discussed the true theory of comets, according to the work of Newton's Principia, Kepler's laws of planetary motion, and the predictions of Halley. 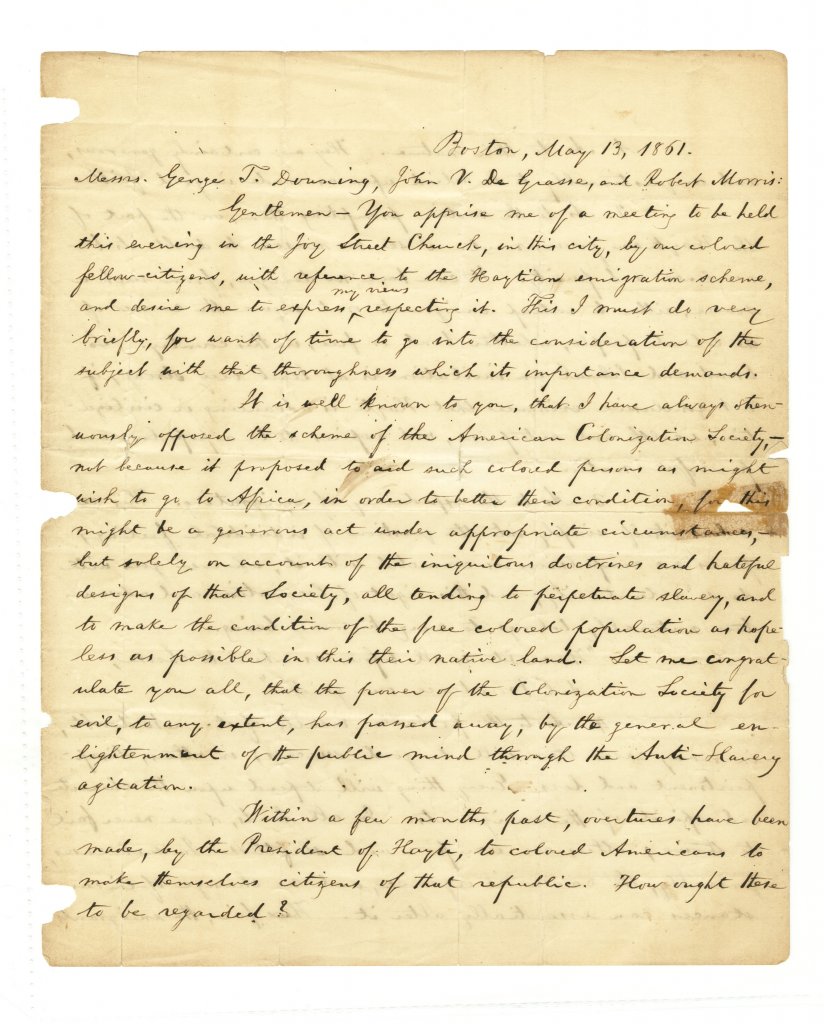 George T. Downing (1819-1903), son of restaurateur and abolitionist Thomas Downing, was a civil rights leader and successful businessman himself. As a young man, George joined the anti-slavery movement and helped hide runaway slaves. In 1841 he married Serena Leanora DeGrasse, sister of John V. DeGrasse - another of the addressees in the above letter.

Following in his father’s footsteps George opened his own restaurant and continued advocating for racial equality. Later in 1854 he opened the Sea Girt House in Newport. He was a member of the 1855 Colored National Convention and in 1857 he began and financed a successful nine-year campaign to integrate public schools in Newport, Providence, and Bristol. During the Civil War, he managed the members’ dining room in the House of Representatives. In 1865, he and others financed the purchase of land for Touro Park in Newport. He continued to fight for civil rights until his death in 1903. In 2003 Downing was inducted into the Rhode Island Heritage Hall of Fame.

Single sheet (approx. 12¾" x 8") headed "A List of the sums that Bennett Munroe [sic] has credit for since the year 1751." Among the transactions listed on the first document is the transfer of a Negro boy from Bennet Munro to Thomas Palmer at Mount Hope in Bristol in 1766 for the price of 53 pounds, 6 shillings and 8 pence. 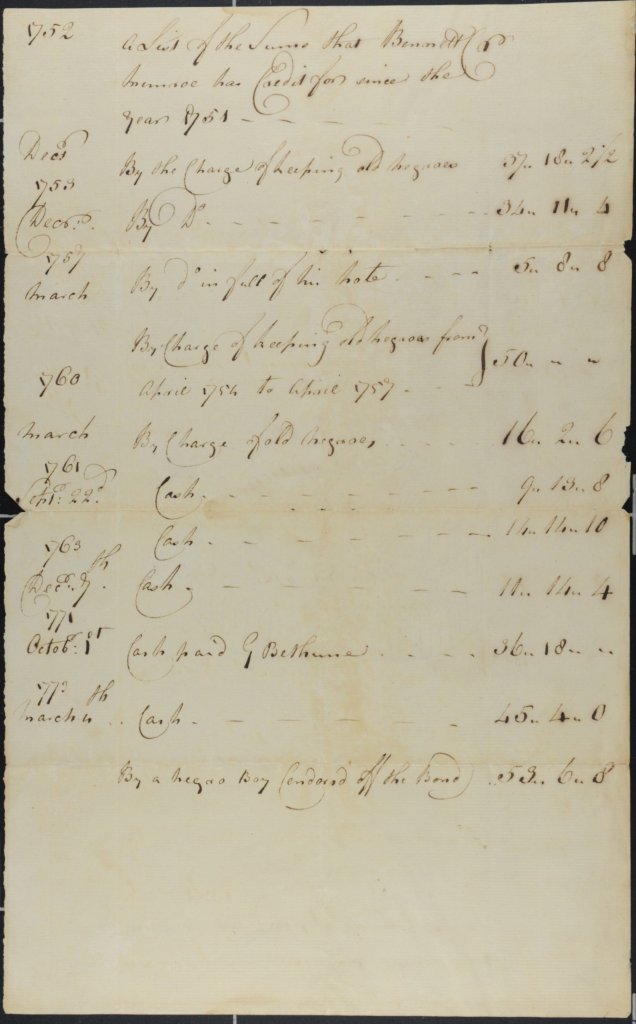 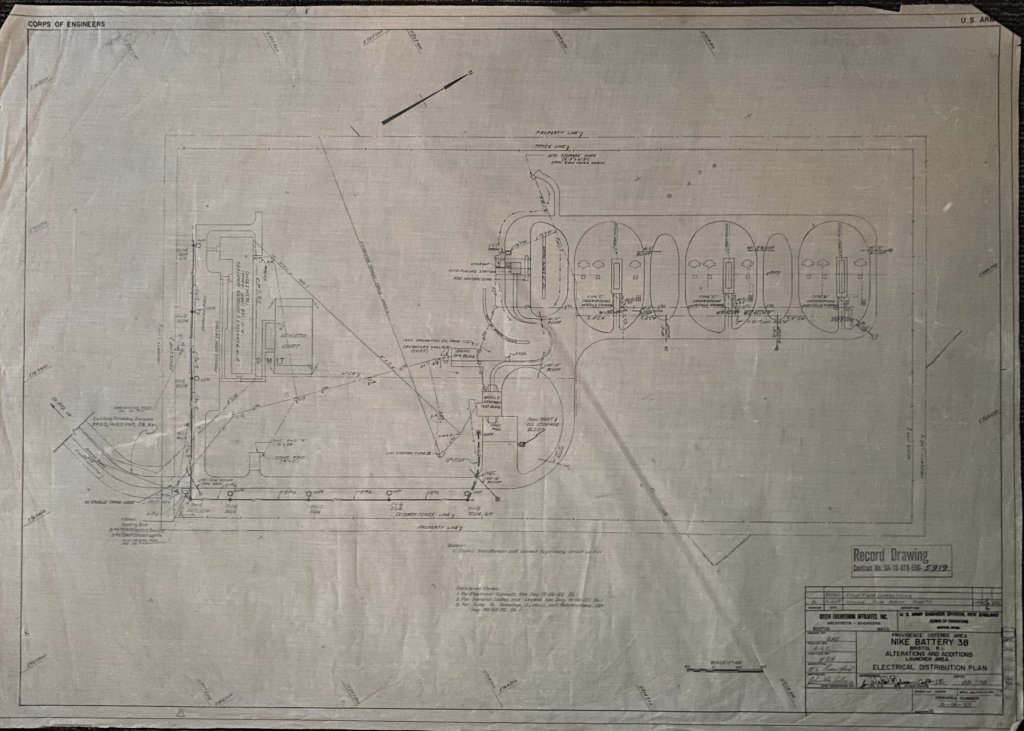 Did you know that the North Campus was home to a government missile site long before the North Residence Hall and parking garages were built? Roger Williams College acquired the property in 1976. The former barracks were converted into student housing. "Nike Hall" became the College's third residence hall on campus, offering special interest housing for architecture students. There are more plans in the archives. 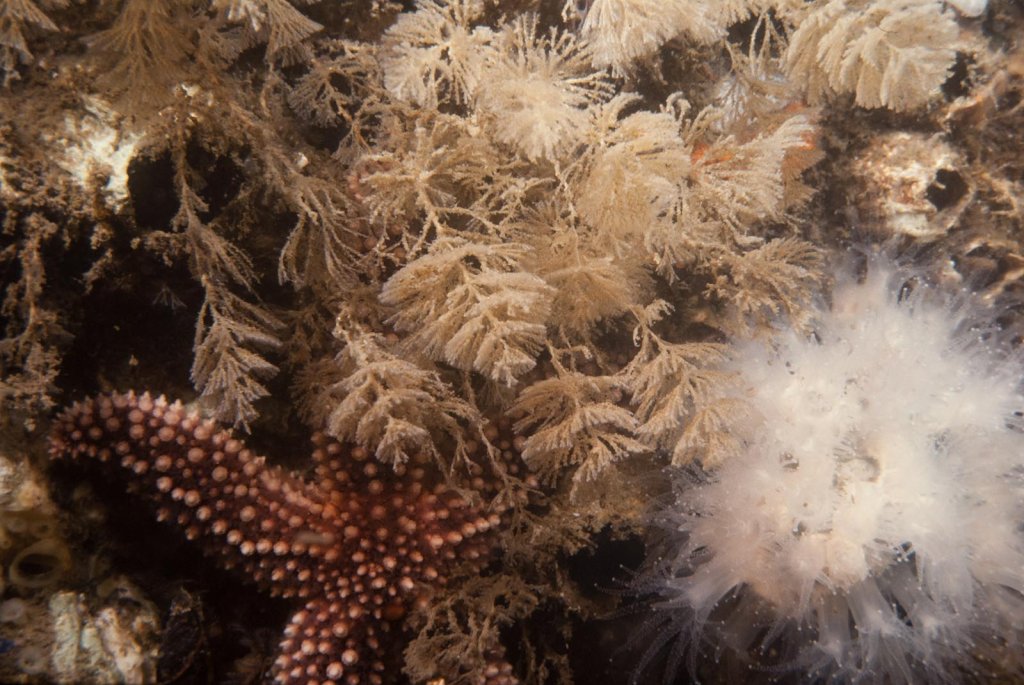 William R. Mershon worked at Roger Williams University (then Roger Williams College) from 1973 to 1987. He helped develop majors in biology and marine biology. The photographs here include specimens he observed in Rhode Island's Narragansett Bay and other locations taken during his tenure at Roger Williams. 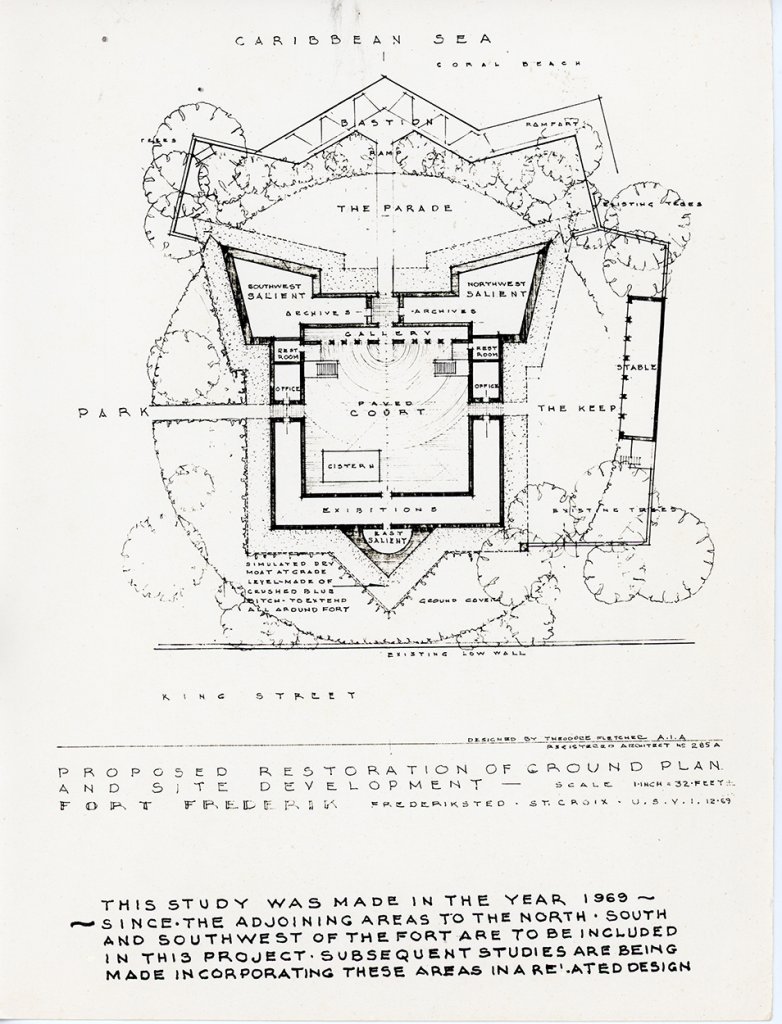 Restoration of the fort to its1780 configuration was completed in 1976, under the directorship of Theodore R. Fletcher. The fort currently serves as an interpreted facility and local history museum. It was individually listed on the National Register of Historic Places in 1996. It was further declared a National Historic Landmark in 1997.

Pamphlet: Report of the Trials of Oliver Cummins, Nathaniel G. Metcalf, Gilbert Humes and Arthur Farrier; who were indicted with six others for a riot, and for aiding in pulling down a dwelling-house, on the 18th of October, at Hard-Scrabble. Providence. Printed for the Purchaser, 1824. 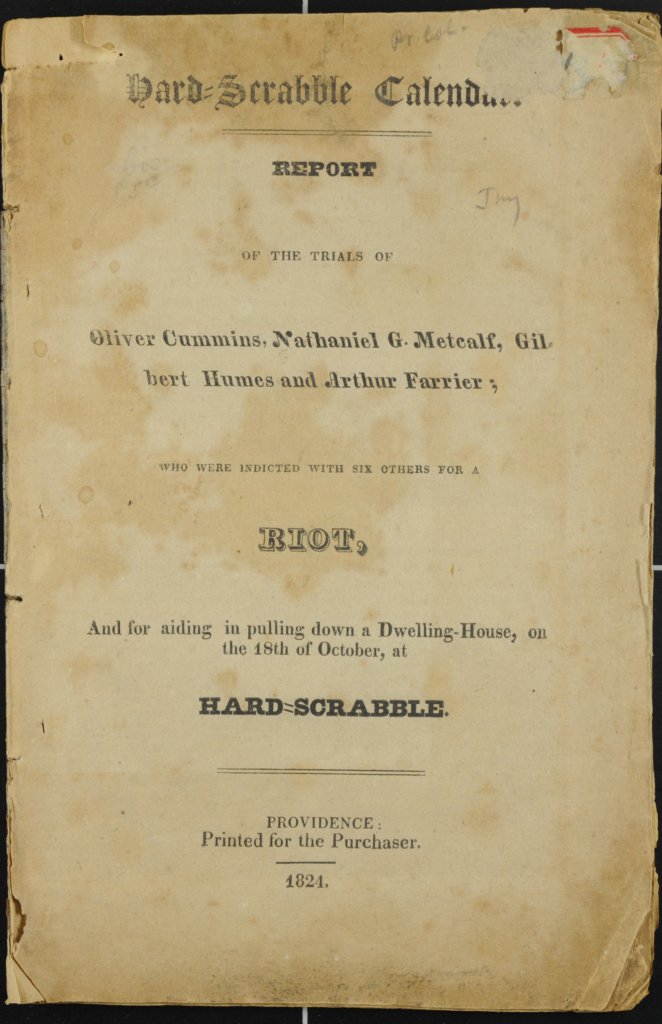 Hardscrabble was a predominantly African American neighborhood located in northwestern Providence during the early nineteenth century. On October 18, 1824 a white mob attacked black homes in Hard- Scrabble, after a black man refused to get off the side walk when whites approached.

Anne “Pete” W. Baker was a prominent historic preservationist who “collected” and preserved over two hundred 17th and 18th century homes and buildings in coastal Rhode Island and southeastern Massachusetts. The archives holds her correspondence with the building owners, architectural and historical drawings, and documentation concerning the restoration. For more, see https://docs.rwu.edu/exhibit/anne-pete-w-baker-collection/.

From The Quill: Remarks by Dean Salatino President Gauvey 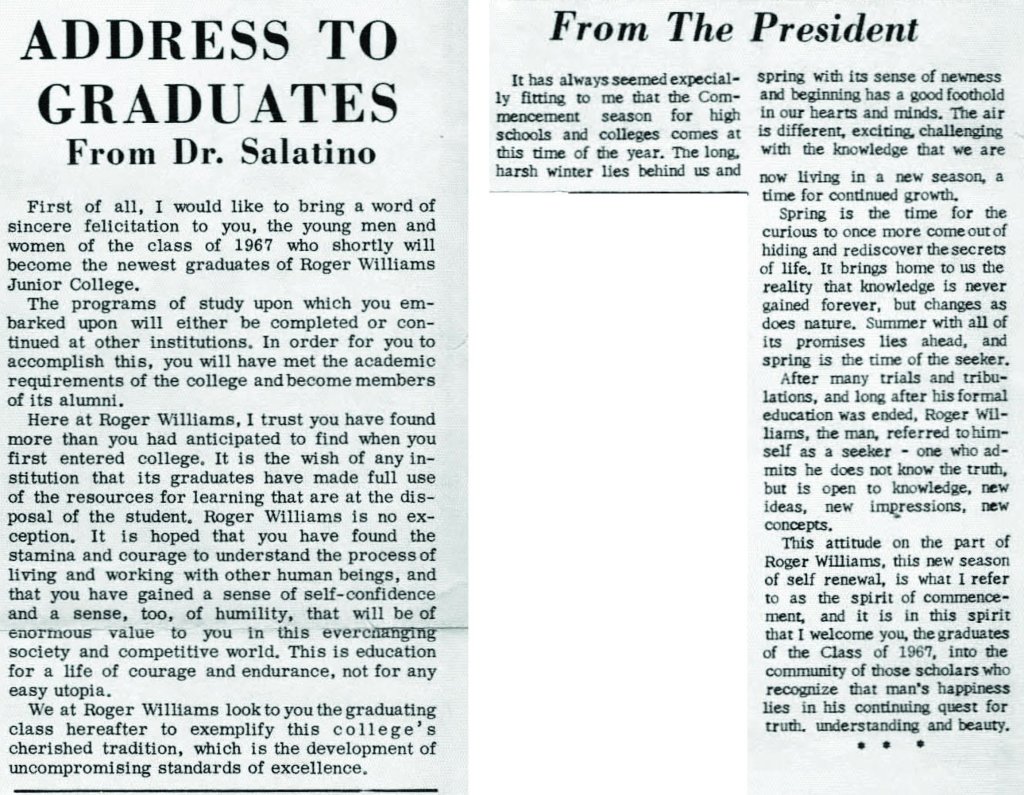 These two articles were written for commencement on June 8, 1967. Spring/Summer commencement ceremonies were traditionally held in June, until 1974. That was also the first year honorary degrees were awarded.

Visit our Digital Commons to see the complete student newspaper for that day. 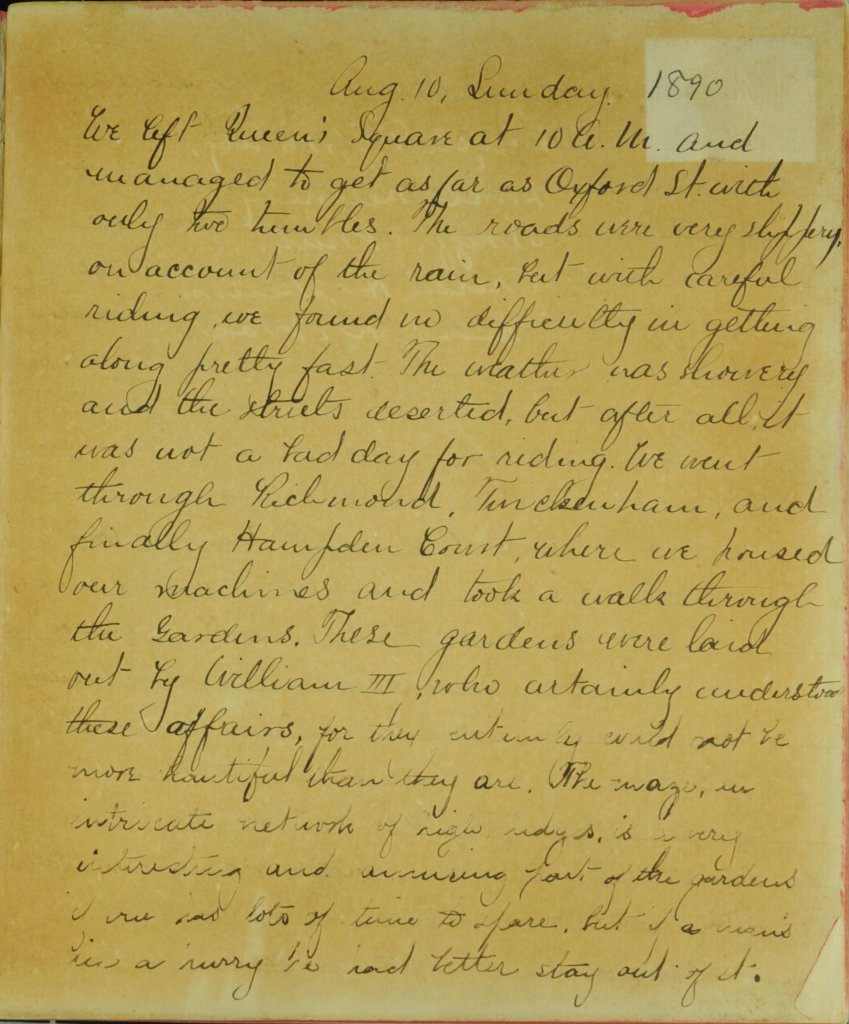 Halsey and Edith DeWolf owned and operated Ferrycliffe Farm into the 1950s, when their daughter (Mary Howe) and son-in-law (Marshall Fulton) took over its management. In the mid-1960s, Mary Howe and Marshall sold 60 acres of the farm to Roger Williams College for its new campus in Bristol.

Visit the archives to see the complete journal (part of the Fulton/Howe Collection), describing Halsey's bicycling trip in England  with his friends Lowell, Strafford, and Charlie.