These Four Future Educators Are Sparking Conversations Around Gun Violence

Four education majors, motivated by the growing rate of gun violence in schools, formed the club, Students United Against Gun Violence, and are keeping the conversation going on campus and beyond

BRISTOL, R.I. – Last February, 17 students at a high school in Parkland, Florida were killed by gun violence. The news hit home for the RWU education students that are dedicating their careers to teaching.

Four seniors in the department, Emma Cleary, Abigail Higgins, Elizabeth Prentiss and Danielle Kane, who were all in teaching placements at the time, were particularly concerned with how they would keep their students’ safe.

“That was the first time that we were experiencing something that tragic where we had the teacher’s point of view,” said Prentiss.

Education faculty noticed the effect the incident was having on their students and provided spaces for them to talk both in and outside of class.

“I remember clearly in my class talking about the shooting and how it feels so close to home. Especially as educators we need to ensure our students’ safety,” said Associate Professor of Science Education Li-Ling Yang.

Having a space to talk and find comfort in the wake of tragedy was crucial. However, faculty members and students wanted to do more. They decided to take action.

With support from Yang and Professor of Social Studies Education Alan Canestrari, the four students organized a trip to Boston on March 24, 2018 to participate in March for Our Lives, a nationwide protest launched by the students of Parkland.

“The energy there was something I’ve never felt before,” said Prentiss. Higgins added, “Everyone shared in a common need for change.”

After the march, the students didn’t want to stop fighting.

“We were feeling so empowered but we didn’t know what to do with it and they have all been such activists in their own lives, so they were able to teach us what comes next,” said Higgins. “Everything that we’ve done has been our initiative but we’ve had support from them. They give us the support and guidance to achieve our goals and then they step back and let us shine.”

The students recall sitting in a classroom, reveling in the energy from the march, rattling off ideas and writing them down on a piece of paper. That’s when they decided to start the club, Students United Against Gun Violence (SUAGV).

Through their club’s table time in Upper Commons and community events, they are able to keep an important conversation going on campus.

Sometimes, people will approach their table and tell stories about the ways their lives have been affected by gun violence. Some have lost a loved one, or they’re from Newtown, where the 2012 Sandy Hook shooting took place. These are the moments that make them want to keep going.

“I think it says something about our club that they feel comfortable enough to share those personal stories,” said Kane. “These are real lives. When you keep the conversation alive, it keeps their spirit alive.”

While interactions like these make the four student leaders confident that their work is having an impact, challenging conversations can be just as powerful. Sometimes students will approach their table and voice differing opinions on the issue of gun violence.

“When people question us, we usually invite them to our meetings. We want to hear their side so we can have a conversation,” said Prentiss. The club invites guest speakers in so that diverse perspectives are represented. Though the students may not always see eye-to-eye, they engage in a dialogue and hear differing perspectives from guests.

Last Wednesday evening, SUAGV hosted their largest event yet. Despite the below freezing temperatures, one hundred and twenty RWU community members gathered to hear from special guest speakers from Sandy Hook Promise, a national non-profit organization founded and led by several people whose loved ones, many of them children, were killed by gun violence at Sandy Hook Elementary School on December 14, 2012. The dialogue that took place after the presentation had a profound impact.

Kane described a moment where a student from the audience raised her hand to make a comment.

“She didn’t know about the event before. But her friend said ‘Come with me. It’s important,’” said Kane. “She said, ‘I’m so glad I came. I didn’t know there was a club like this on campus and now I just want to make a difference. I want to join.’ It was one of those moments where we all looked at each other and thought ‘we have to keep this going. We can’t stop here.”

Though the four founders are all in their final year at RWU, they have big plans for SUAGV. They are raising money for Sandy Hook Promise this semester and will focus their efforts on supporting victims of the Parkland shooting next semester. When they graduate, they hope to pass SUAGV to another group of young leaders on campus. 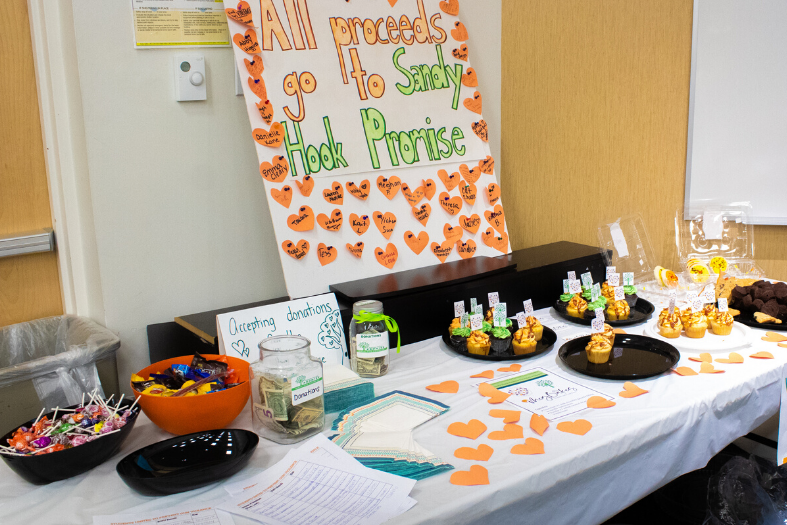 “The impact we make now is going to follow us for the rest of our lives,” said Cleary.

As educators, they also plan to bring their passion for change with them when they graduate.

“They’re all beginning teachers,” said Canestrari. “I’d love them to carry the seeds that they’ve planted here to the larger, more global community, as ambassadors and social activists.”

They plan to keep this energy alive, informing future communities they encounter about these issues and working to keep their future students safe in the classroom.