BRISTOL, R.I. – Hotdogs are synonymous with summertime barbecues and baseball games, when even steadfast health-nuts indulge on a special occasion. But how do you shift the common perception that hotdogs are mystery meat and that you might not want to know what’s inside?

Roger Williams University students tackled that issue with an innovative marketing campaign that captured second place in the regional round of the 2019 National Student Advertising Competition. This was the third year in a row that an RWU team earned a top-two finish, competing against colleges and universities from Massachusetts, Connecticut and Rhode Island in the annual competition sponsored by the American Advertising Federation.

“We did a lot of really good work and put a lot of time into it, so it feels good that we were recognized,” said Katherine Worth, a marketing major with two visual arts minors (painting and drawing, and ceramics) who served as a co-leader of the team. “We had strong creative and strong media, making a very well-rounded campaign and the judges thought that as well.”

The annual competition enlists a corporate sponsor to provide a case study that identifies a real-world problem, as well as associated campaign objectives and a campaign budget. This year’s challenge was to destigmatize the hotdog and place Wienerschnitzel at the forefront of improving the industry.

RWU’s interdisciplinary team of 20 students developed an integrated advertising campaign, complete with a comprehensive plans book that suggested the implementation of a “certified honesty seal” to build consumer affinity, and a blend of traditional and unique advertising opportunities built around transparency of the company’s ingredients.

“I think this year our strategy was very on-point. We wanted to take that issue head-on and not just show happy people eating hotdogs,” said Emily Warrington, a double major in graphic design and marketing who also served as a co-team leader. “We wanted to get to the roots of why people don’t want to eat hotdogs: people think they’re made of leftovers like pigs’ feet or lips – not good things for you to eat. So we came up with creating a seal approved by FDA, and I think that was a pivotal point in the campaign for us.”

Many of the students worked on the yearlong campaign through the Advertising Campaigns Practicum, a project-based course that bridges several disciplines. The team presented their work at the April 12 regional competition in a 20-minute multimedia pitch to a panel of judges, comprised of advertising professionals. Their marketing plan included an interactive social media hashtag campaign educating consumers about hotdog ingredients, pop-up events collaborating with micro-breweries, and Spanish language television ads. 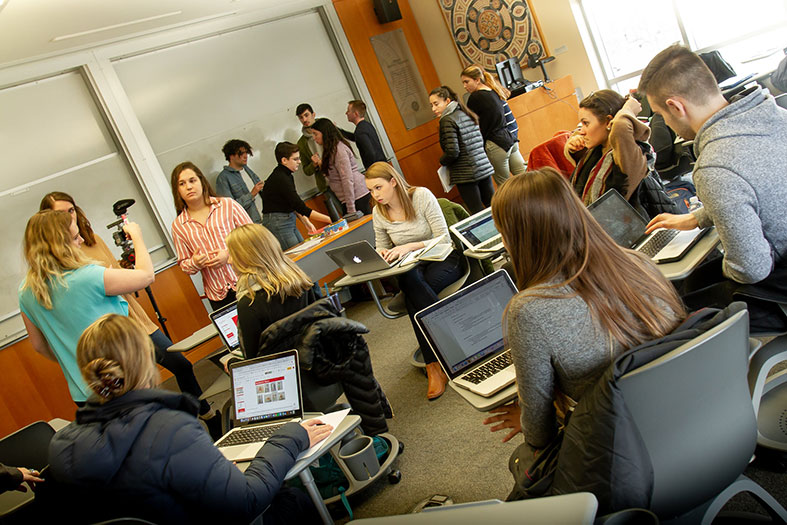 Both Worth and Warrington emphasized that having this hands-on experience of solving a real-world marketing issue is a valuable credential for their résumés. It already helped Worth land a job with renowned Boston-based advertising firm MMB, and provided Harrington with the skills and experiences she needs to enter graduate school.

“This course taught me how to make ads, what employers and clients want to see in a portfolio, and how to work with people on a team,” Worth said. “I’ve gotten a lot of feedback from employers about my portfolio – they thought I had really strong campaign work and a strong book, and that’s super important for anyone who wants to go into a creative job. You need a portfolio. They won’t hire you without one.”

“This is as close to working at an agency that you can get while being in college,” Warrington said. “It teaches you to think strategically about solving problems for a client and delivering what they want. And you come out of this with a tangible plans book to give to a potential employer and say, ‘I made this.’ You’ve put so many hours into it that when they ask questions, you could talk for hours about what its purpose is and what went into it. I think having something that you created that they can see really makes you stand out in an interview.”