NEW YORK, N.Y. –  When most people think about Natural Light beer, they don’t picture pink flamingos. But the summery label on their new strawberry lemonade Naturdays beer has made headlines and skyrocketed sales of the new-to-market refreshing beverage. Elite Daily says, "the pink-and-yellow ombre cans are currently making their way across the country."  So, who is the genius behind this instagrammable design?

It’s RWU Alum Leah Saccoccio `12, who was given the assignment on the first week of her job as senior designer at Draftline, AnheuserBusch’s in-house marketing agency.

“They said, ‘we have this project that needs to get done tomorrow.’” Saccoccio recalled. “So, me and one of the other art directors stepped in and made them six designs. They loved all of them. We put them into testing and from there we just kept developing it so that it was what consumers wanted.” 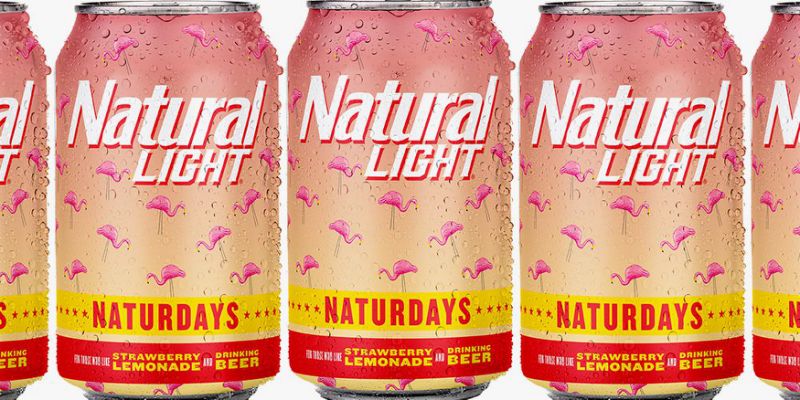 They tried out other summer-themed images, like party cups and golf accessories, but nothing was quite as popular as those tiny pink flamingos. The team even created a NASCAR Naturdays car to promote the drink and make spectators smile.

Saccoccio never guessed that flamingos would play such a big role in her future career when she first attended RWU.

She has always had an artistic side.  She also had an interest in business, which grew once she took an intro level business course. However, after declaring her marketing major, she still yearned for an element of creativity in her academic path. Thus, she took her first graphic design course and then declared graphic design as her second major.

“Art has sort of been a hobby of mine, so that’s why I decided to pair it with business. I thought, ‘yes I can do art’ but I wanted to have bigger knowledge and be more marketable.”

“Graphic Designers help businesses solve communication problems and many designers start their own businesses at some point in their careers so having a business background sets a student up for success for either of these scenarios,” Forehlich said. “Students who pursue two majors give themselves a boost by combining skills to make themselves more attractive to potential employers.”

Saccoccio had the right idea. Taking on a double major did make her marketable, and allowed her to pursue a career path she loves at the same time.

Since graduating, she has designed advertising campaigns for jewelry, spirits, skincare and more.

Now, at Anheuser Busch, she works on all the innovation brands that are new to the market. “It’s a really awesome opportunity,” said Saccoccio. “I basically get to build every brand from the ground up, from packaging to retail displays to website design to social.”

Her marketing background helps her figure out what consumers want. And her design skills put that data into practice. In this case, her combined skills helped her discover that pink flamingos are the perfect image to represent the fun, summery branding of Naturdays. All that research and quality design paid off.

Saccoccio says the fruity beer is in breweries nationwide and quickly becoming a summer staple for beer-drinkers and non-beer-drinkers alike.