Roger, White and Blue: RWU Shows off Float in Fourth of July Parade

Steamboat float by RWU Orientation Advisors wins “Most Beautiful” in this year’s Fourth of July Parade.

Bristol, R.I.— The RWU Float at this year’s Fourth of July Parade resembled a steamboat, with post card detailed painting all the way around the float. Each post card was hand painted to resemble the many different waterways across the United States. No wonder the float was awarded “Most Beautiful” by the Bristol Fourth of July Committee.

Fourth of July is not celebrated lightly here in Bristol, Rhode Island and neither is the Roger Williams float, created by Orientation Advisors each year. The big reveal was held on campus on July 3. This year’s theme was “To: The Sea, From: Shining Sea,” said Float Chair Kylie Freitas `18.

Rising senior and third year OA, Bailey Eckersley, said that after orientation sessions are over, the float committee comes together to work long shifts to make sure the float is prepped for the fourth.

“During the weekends and even on the weekdays, some people cut pieces of wood for the float, while others paint the float bed, while other are detailed painters who paint the pop outs on the float,” said Ecksersley.

RWU students are honored to participate in such a longstanding tradition.In 1785, the very first Fourth of July parade was celebrated right in the heart of downtown Bristol. The parade has been celebrated every year since, making this year, 2019, the 234th annual parade. The celebration officially started on Flag Day- June 14th. From there on out, Bristol hosts many different and fun outdoor activities for all to enjoy! The activities range from free concerts in Independence Park to a Fourth of July Ball. However, the most popular events of them all, is of course the parade. 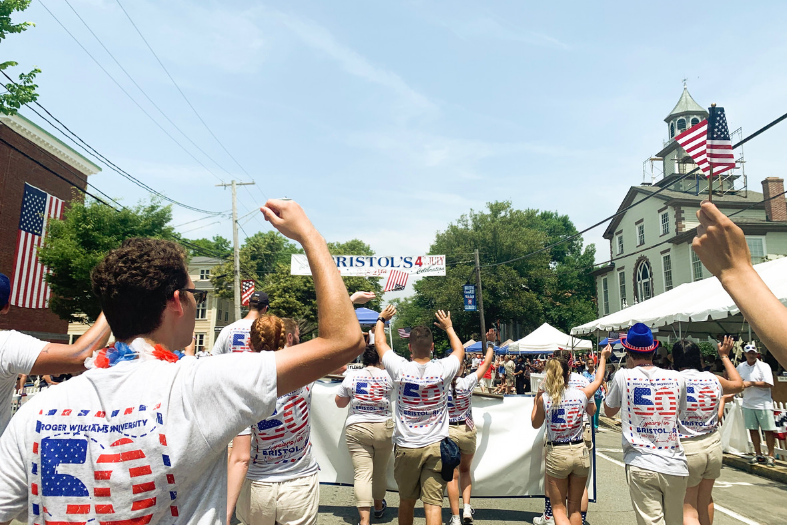 This year was extra special as the RWU community celebrated 50 years of having class on the Bristol campus.

Upcoming junior and current OA, Tessa Slatkavitz said, “the most rewarding part of being a part of the parade is just being able to be in one of the oldest and biggest celebrations, all while representing our university.”