​Designing a Craft for Manned Expeditions on Mars

BRISTOL, R.I. – Human exploration of Mars is one of the next frontiers of space travel that NASA seeks to conquer within the next decade. To make that possible, they have been funding researchers all around the world and including at Roger Williams University. That means, when NASA finally lands a manned spacecraft on Mars, it might feature the design specifications of senior Hien Ngo.

For three years, the applied mathematics and biology double-major has been investigating the optimal craft shape and interior design of a Mars ascent vehicle that would allow humans to work and live on the uninhabitable planet for months at a time. With funding from a NASA Rhode Island Space Grant and EPSCoR Space Grant, Ngo has worked with RWU Professor Yajni Warnapala to design a rover that deploys scientists from a larger spacecraft outside Mars’ atmosphere to touch down and operate as a livable workstation.

While other researchers have looked into typical aircraft shapes, Ngo and Warnapala – who heads the math department at Roger Williams – probed an unexplored form. Their rover is a sphere encircled by a disc, reminiscent of the otherworldly appearance of UFOs.

“If there really is a flying saucer, there must be a reason – our rockets and our planes don’t look like that,” Warnapala said. “Flying saucers seem to be an entirely different shape. And what we are researching is not of our Earth. We are looking at a different planet, different atmosphere, gravity and density.”

This makes their research really unique – no other researchers are designing toward that shape, Warnapala added. Since she came up with the shape, Ngo got to name it: “spherical quatrefoil” (pronounced “catch-foil”).

Ngo then turned her focus toward the interior design. Applying an intersection of mathematics, physics and computer science, she deeply researched Mars’ atmosphere and evaluated how potential lighting sources would work within the shape to determine how to optimize brightness inside the craft.

“For practical reasons, the interior design is just as important as the exterior,” Ngo explains. “The spacecraft is going to ascend to Mars and must work logistically in terms of being a space we can inhabit while exploring and working on the planet. It goes hand-in-hand with exterior design, because the outside creates what goes inside – and it has to be hospitable for the people who are inside it.” 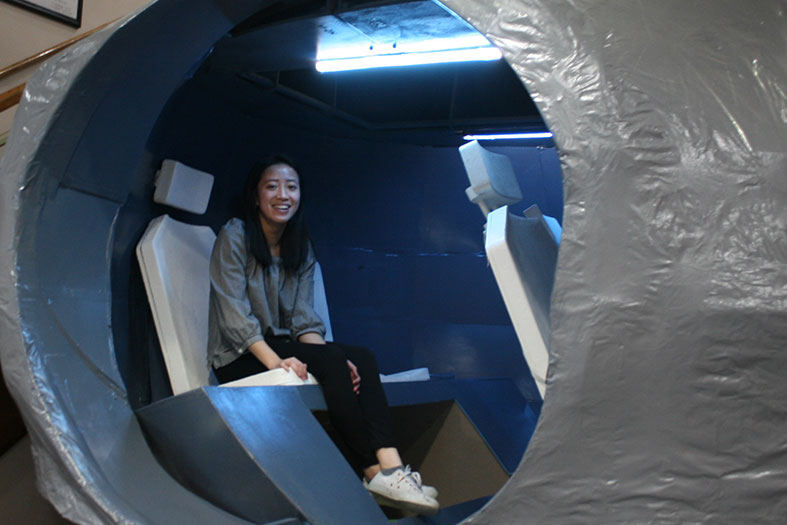 Picking lighting sounds easier, but when you're designing for living on Mars, everything gets much more complicated. Ngo had to consider the type of light source (sunlight or artificial), the position of the light source and how that changes as the craft ascends and descends, light positioning within the sphere (no sharp corners is an intentional element of the design), and whether materials within the craft absorb or reflect the light waves. Quickly ruling out natural sunlight as an effective lighting source due to Mars’ tempestuous atmosphere, that left her with designing toward an artificial light source.

For that she also explored the effects of warmth and color. She concluded that LEDs would be necessary to keep the temperature down from continuously operating lights within the small craft. And to make them blue LED lights based on extensive research by NASA that suggests the color “mimics the blue sky we’re accustomed to regulating our circadian rhythms and natural cycles to,” Ngo said.

If you’ve visited the Marine and Natural Sciences building lately, you’ve seen her work – it’s hard to miss. A model was erected on the ground floor, built in partnership by industrial design students at Rhode Island School of Design and Ngo, who applied her visual arts minor to complete the shell with masking tape and papier-mâché, paint the interior steel gray and white according to her conclusions for optimal brightness and install a (model) blue light.

At RWU, undergraduates have the unique opportunity to collaborate with professors on in-depth research which might mean a three-year NASA funded study. In addition to presenting her research at national academic conferences where she won first place for poster research on Numerical Analysis research, Ngo has received grant funding (including the Provost’s Fund for Student Research at RWU) and part of her work was published as a co-author with Warnapala in the African Journal of Mathematics and Computer Science.

“She learned a lot of things other than just understanding the problem – she learned to program in FORTRAN 77, write scientific code and scientific writing,” Warnapala said. “She already has a publication under her belt, has won awards and grants. These are distinctions that students at other universities don’t have.”

Ngo says she never dreamt that her research opportunity at RWU would contribute to space exploration.

“This was a golden opportunity outside of the classroom to investigate something you’re interested in, and to apply yourself and what you know. For me, it made me feel like I could be part of an academic community – it gives you the confidence that you are able to do it,” she said. “Grad school is about researching and being able to apply yourself outside the lecture hall, and this was like a practice run. I was able to do it way sooner than grad school and that’s a real advantage.”

After she receives her hard-earned diplomas this May, Ngo will work as a teaching artist for City Art Youth in Providence through AmeriCorps. Then it’s off to graduate school, where investigating space exploration at Roger Williams prepared her for success in another academic frontier. And one day not long after that, she may get to see her spaceship fly.