From the courts, the mats and the ice, RWU’s athletes showcased their talents through an incredible winter season

BRISTOL, R.I. — As the temperature outside rises and our spring athletes are ready to take the stage, we first look back at our 2019 winter season. Filled with post-season games across all teams, broken school records, journeys to nationals and multiple championships, RWU’s winter athletes displayed incredible skill, talent and heart throughout the season.

With a successful regular season, RWU’s Men’s Basketball entered the Commonwealth Coast Conference as the #3 seed. Defeating University of New England in the quarterfinals, the team advanced to the semifinals to face #2 seed Gordon College. After a close match, the Hawks fell to Gordon College rounding out the season with an overall 15-12 record. But this season there was more to celebrate than just game wins. Senior guard Austin Coene earned a spot on the All-CCC first team while sophomore forward Drew Hart was named to the All-CCC Third Team. In addition, Coene broke the school record for career points and became the first player to score 2,000 points in RWU history, was a three-time CCC Player of the Week, named CCC Player of the Year and CCC Senior Scholar-Athlete of the Year. As his final season came to a close, Coene was selected for the College Sports Information Directors Association (CoSIDA) Academic All-District 2 Team for the third straight year. But Coene’s time on the court isn’t quite over yet. He will be playing in the 2019 Reese’s Division III College All-Star game on March 16 after gaining more than 28,000 online votes from his supporters. 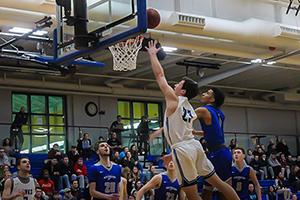 "From scoring 2,000 points and winning CCC Player of the Year, to having another winning season with my team, it’s all been special to me,” Coene said. “All of it would never have been possible without my teammates pushing me day in and day out, and having the full support of my coaches, family, and RWU."

Having almost half of their team graduate last year, this year’s young squad had big shoes to fill. Starting out the season with a record of 3-9, the women soon found their new roles to round out the season with an eight-game winning streak and taking home nine of their last 11 regular season games. The Hawks entered the Commonwealth Coast Conference Tournament as the #4 seed but after a close match against #5 seed Curry College in the quarterfinals, RWU’s season came to an end with a 13-13 record. On top of this prosperous season, two players were named to the All-CCC team. Captain and junior guard Samantha Leone was selected for the All-CCC First Team and freshman center Karli Opalka was chosen for the All-CCC Third Team. 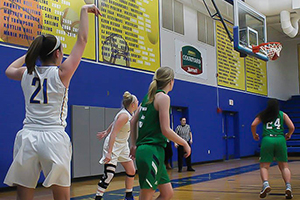 “RWU Women’s Basketball had a great season, even if it didn’t end the way we would have liked it to. But we have a lot of returning players next year so I’m excited to see what we can bring to the table,” Leone said. “And being named All-CCC First Team was truly an honor. However, it wouldn’t have been possible without all the support and hard work from my teammates and coaches."

Both the Men’s and Women’s Swimming & Diving teams had an impressive season. The Men’s team accomplished its first undefeated season and took home the NEISDA Championship for the third straight year, while the Women’s team finished the year with a 5-3 record and earned runner-up at the championship. During the NEISDA Championship, the teams earned a total of 42 medals including 14 gold, 15 silver and 13 bronze. In addition to team victories, there were many individuals who earned special recognitions as well. Coach Matt Emmert was named Charles Silva Swim Coach of the Year, senior Hunter Olson won the Bob Muir Senior High Point Swimmer Award and senior Josh Seabrook earned the Senior High Point Diver Award. To round out this already successful season, RWU had 14 women and 18 men named to the 2019 NEISDA All-New England Team.

“We spent a lot of time enhancing our team culture outside of the pool, which we felt played a significant role in our team’s success in the water,” said Emmert. “It was great to conclude the season on a high note, but for us, it was just another part of the process. We take pride in utilizing the sport of swimming & diving as a vehicle for our student-athletes to develop the skillsets necessary to live meaningful and engaging lives. I’m so grateful to be able to work with such a dedicated and committed team, staff, and department.”

With an overall 12-9 record, RWU’s Wrestling team finished runner-up in three tournaments, recorded two wins over nationally-ranked teams and placed in the top 16 at the National Wrestling Coaches National Dual Meet Championship. As the season came to an end, RWU placed third out of 17 teams at the Division III Northeast Regional Championship and came out with eight placers, the most in RWU history. By the end of the season nine student-athletes were regionally ranked from New England Wrestling Association. After winning their brackets at the regional championship, juniors Taylor Shay and Tyler Gazaway qualified for the NCAA Tournament. Shay, who advanced to the second day of the NCAA Championships was named All-American and finished number seven in the country. 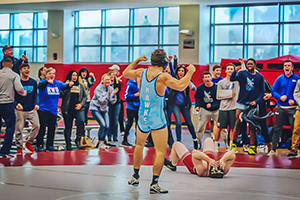 “This season had its ups and downs but we finished strong at the end of the year. We traveled to Kentucky for national duals where we went 2-2, which was a lot of fun and we were able to gain some experience competing on a high level,” Gazaway said. “We will be returning 9 out of 10 starters so this is still a pretty young team with a lot of talent. We have so much potential and I think big things are in store for us next year.”

RWU’s Men’s Ice Hockey team ended the season with an incredible record of 24-5-2. They won the Quahog Tournament for the first time, won the regular season league and took home the Northeast Collegiate Hockey Association (NECHA) Championship for the third year in a row. Coming off this win the team secured the #10 seed and traveled to Albany, NY for the American Collegiate Hockey Association (ACHA) Northeast Region National Playoff tournament. RWU advanced to the second round after beating U-Mass Lowell, but lost a close game to #3 seed Northeastern. But this year, the team made a bigger impact off the ice. Holding an awareness game in support of a past team member who died from testicular cancer after graduating in 2017, the team honored James Stowe and his family and raised $2,800 for the James Patrick Stowe Foundation. 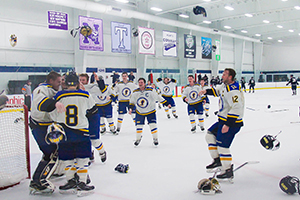 “All involved with the program are beaming with pride after the 2018-2019 season. Their excellent record was just a small reflection of the accomplishments,” coach Michael O’Brien said. “But it was the intangibles that made this team special. Their sportsmanship, commitment to community, work ethics, pride in the university, and genuine love of one another was what made the season outstanding. I believe they learned a great deal about the sport, themselves, goal setting, and life in general, and at the same time had a lot of fun doing it.”

Entering their first year as a designated club sport, RWU’s Gymnastics team has a season to be proud of. Starting the season with a solid team score of 95.05, the women placed 5th overall at the Boston University meet. On the men’s side, freshman Patrick Johnson took 3rd place on floor and sophomore Ethan Thibeault earned 2nd on floor and 3rd on pommel horse. The second meet saw the women’s team score soar to 97.75 with freshman Hannah Cameron earning her season best on vault and junior Emma Banks placing 7th on both balance beam and vault. Thibeault had continued success, earning 2nd place on floor, pommel horse and vault. The final meet this season saw all-around team improvement on balance beam and floor with Banks earning 3rd on floor and finishing 11th all around while junior John Liberty placed 1st with his floor routine and 2nd on vault. The team has made great strides of improvement throughout the season and are geared up and ready to compete in the 2019 NAIGC Nationals this April. 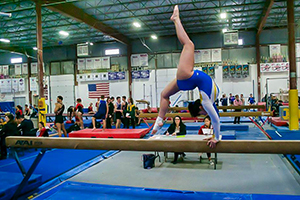 “I think it’s notable that we’re a very young program and still have meets where some guys and girls place individually on events, even if we aren’t quite there as a whole team yet,” said junior John Liberty. “But since September, the improvements and new skills that have been added or swapped out in routines are really impressive in what we’ve been able to accomplish.”