Gentrification
From the book description for Gentrifier (2017): 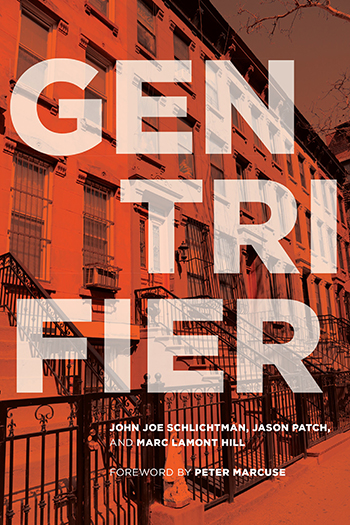 “As urban job prospects change to reflect a more ‘creative’ economy and the desire for a particular form of ‘urban living’ continues to grow, so too does the migration of young people to cities. Gentrification and gentrifiers are often understood as ‘dirty’ words, ideas discussed at a veiled distance. Gentrifiers, in particular, are usually a ‘they.’ Gentrifier demystifies the idea of gentrification by opening a conversation that links the theoretical and the grassroots, spanning the literature of urban sociology, geography, planning, policy, and more. Along with established research, new analytical tools, and contemporary anecdotes, John Joe Schlichtman, Jason Patch, and Marc Lamont Hill place their personal experiences as urbanists, academics, parents, and spouses at the centre of analysis. They expose raw conversations usually reserved for the privacy of people’s intimate social networks in order to complicate our understanding of the individual decisions behind urban living and the displacement of low-income residents. The authors’ accounts of living in New York City, San Diego, Chicago, Philadelphia, and Providence link economic, political, and sociocultural factors to challenge the readers’ current understanding of gentrification and their own roles within their neighbourhoods.”

His earlier gentrification work examines the neighborhood of Williamsburg, Brooklyn. As a process gentrification exists at the nexus between reinvestment and long-term urban communities. New residents in this gentrifying neighborhood depend on many of the same features found in traditional neighborhoods: public characters and eyes on the street. The difference with gentrification is that new business owners, especially women entrepreneurs, act as what I term faces on the street. These new public characters, and the sites of consumption they run, increase the circulation of new residents throughout this heavily industrial neighborhood and act as conduits of information. At the same time, they are embedded in the industrial and ethnic aesthetics of the existing space.

Streetfood Vendors
This is a renewed project on food vendors. Originally conceived for vendors in New York City, this project is now focused on vending in Providence, RI. Much has been written about food vendors in developing countries, as recipients of micro-enterprise funding and as employment sites for low-income women. How do local vendors relate or differ from their international counterparts? Food vendors also have a long, complicated history in the United States. At various times, they have been the target of political campaigns and putative regulations. How do vendors handle local regulations? Vending is a key component of daily street life in some communities. Vendors act as a nexus point for food, health, street life, the informal and temporary economies, and immigration. Vendors originate from multiple countries. Food vending is an entry level job for many new immigrants, but may become permanent labor. How do vendors establish their businesses and maintain themselves? As with many businesses, food vendors provide eyes on the street, and establish themselves as important types of public characters. How do vendors interact with their neighbors, and what type of extra-commercial benefits do vendors provide?

Hurricane Katrina and Graffiti
This project exams over 500 pieces of graffiti created in the greater New Orleans region in response to Hurricane Katrina. Disasters are defined by trauma. The survivors of a disaster need a means to convey their emotions, respond to political decisions, and clarify their status as survivors. In the wake of Hurricane Katrina and the political and infrastructural failures associated with it, residents of the Gulf Coast were limited in their ability to broadly and unilaterally express themselves free of news media or governmental filters. Graffiti offered one starkly visible technique to externalize the emotions and political responses felt by the survivors of Hurricane Katrina. The content of this graffiti reflects local humor, castigates political and civic leaders, and memorializes victims in language and symbols distinct to the inhabitants and their locale.