The Mark of Excellence Award Winning HawkTheVote Election Media Lab planned and produced a series of election-related events leading up to and on election night.

BRISTOL, R.I. – “We're here with reelected governor Gina Raimondo,” said Kaylee Pugliese to the governor, after voter results confirmed she won her second term on Tuesday. “We are wondering what your first three things are that you're going to do in your new term."

On the evening of November 6, the senior journalism major was reporting live from the Biltmore Hotel, Skyping into RWU's newsroom studio, where HawkTheVote Election Media Lab covered and analyzed midterm election results as they arrived.

“It was meant to encourage students to think about elections and get engaged in reporting political campaigns,” says Associate Professor of Communications Paola Prado.

This year’s lab met every Tuesday afternoon in the fall semester to participate in and organize a series of election-related events. They went behind the scenes of the WPRI 12 Gubernatorial Debate at RWU in September, produced their own debate in which student representatives discussed election issues in October, and reported live as results came in on election night.

Hosting the gubernatorial debate on campus gave these budding journalists a chance to learn from the professionals about camerawork, on-screen reporting, and moderating. It was also part of larger initiative to get students thinking seriously about local elections and important issues.

“I observed how they took in each candidate and went about very sensitive topics,” she says. “They also controlled the debate and made sure everything was timed correctly.”

When it came time to produce their own livestreamed debate on October 16, students applied what they learned from this firsthand experience with real political reporting.

They also learned to work collaboratively with their peers. Being part of a team allowed them to step outside their comfort zones. Jordan Phelan, for example, tried his hand at moderating. 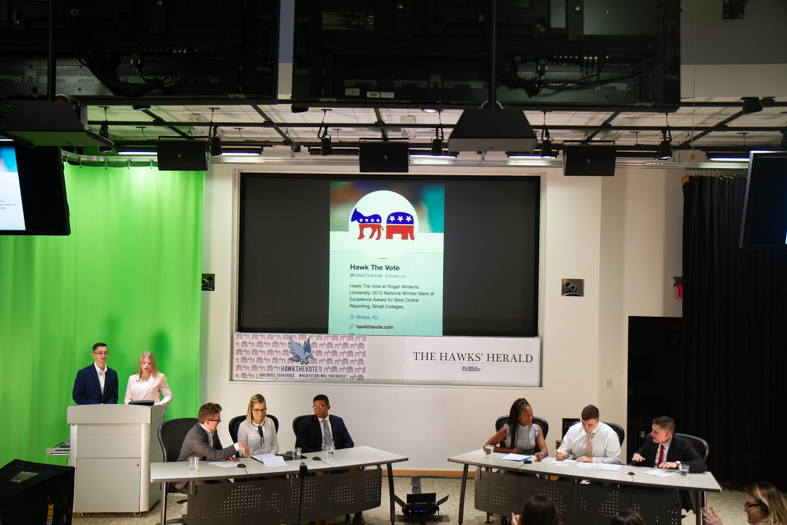 “I chose to be a moderator because I wanted to challenge myself,” the senior journalism major said.

He and his co-moderator, junior journalism major Megan Willgoos, asked members of the RWU College Democrats and Republicans to consider the tough topics, ranging from gun control to women’s rights to race to climate change.

After the debate, HawkTheVote students met to reflect and plan for the big night – election night, where some students would be reporting live from campaign headquarters, while others would analyze their findings back in the GHH newsroom, all for a live-streamed production. They didn't have much time though, because election night was just around the corner.

“The very first year we ran a HawkTheVote, they were able to break news ahead of local media,” Prado explains, noting that her journalism students were the first to report on Professor Speakman being re-elected to her seat on the town council.  This year’s class was determined to get those firsthand perspectives too. Back in the classroom, professor Prado ran through a checklist and action plan to prepare the journalists for election day.

“What races do you want to cover?” Prado asked.

The team had decided upon four different beats; Education and Economy, Health Care, Gender Equality, and Environmental Issues, so the goal was to choose races that were closely tied to those issues. They decided to follow the Governor, Senate, and House races.

“What is the best way to prepare for an interview?” Prado asked the students.  “Just know everything there is to know about anything election related,” said Almeida.

They divided up research on the candidates and their issues. They decided who would be in the studio and who will be out in the field. They picked prompters, producers, social media people, and moderators. Some had already found their passions and wanted to stick with them.

“I want to do camera. Anywhere. I love camera,” said senior journalism major Brett Johnson, who discovered this passion during the HawkTheVote debate. 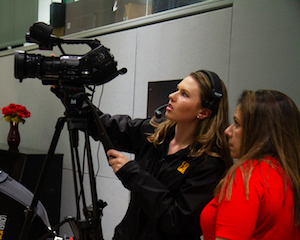 They discussed the tiniest details that would be crucial to making the night go smoothly – cell phone group chats, charging equipment, gassing up cars, clothing, even makeup and hairspray.

After writing a plan on the whiteboard, the students dispersed with their work cut out for them.

At 7:15 on November 6th, Almeida took her place at the podium as moderator.  She would be taking Skype calls from her teammates in the field, and reporting on news as it arrived. Headsets had been adjusted. Microphones had been fitted. Makeup had been checked. Almeida’s in-studio team gave her the thumbs up and the WQRI live stream began. 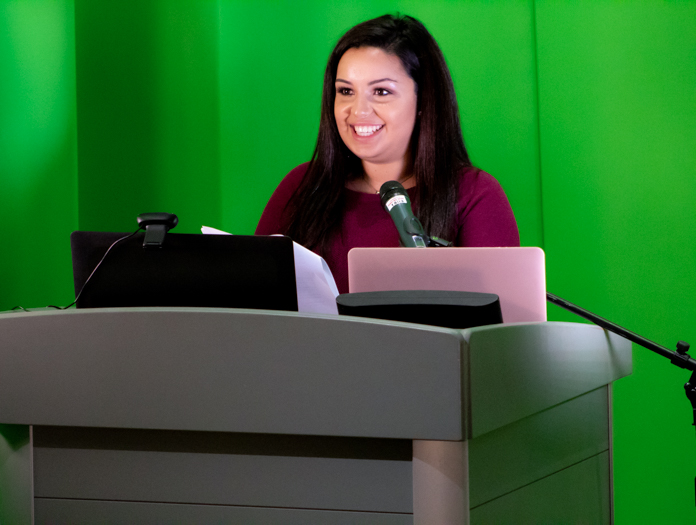 Professor of Justice Studies Robert Engvall and Director of Media and Public Relations Edward Fitzpatrick joined College Democrat David Hayes `20 and College Republican Kalasia Richer `21 to warm up the audience for the breaking news to come. Throughout the night, they would discuss reports from the HawkTheVote journalists in the field and other news sources.

Fitzpatrick asked the student political group representatives about the level of engagement they’ve seen from their peers.

“More than just voting, students have been working out at the polls and getting informed before they vote,” Richer said. 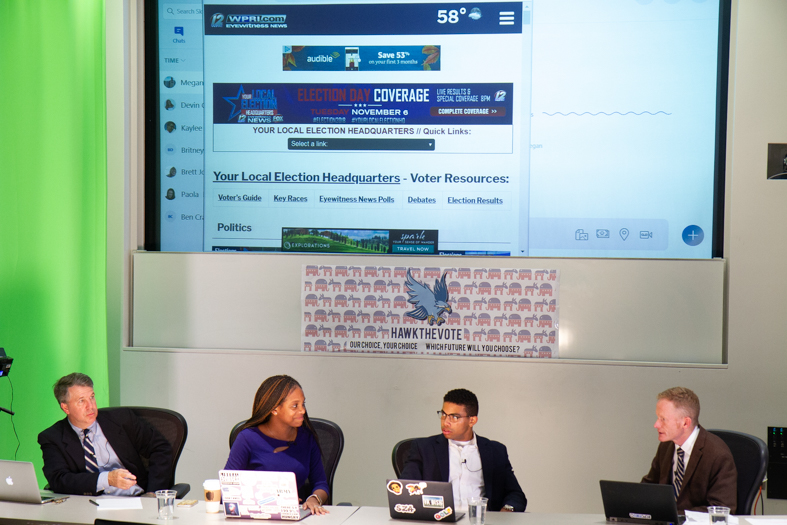 Meanwhile, HawkTheVote reporters were not just getting informed, but getting firsthand reactions to the results. Megan Wiligoos `20 , Kaylee Pugliese `19, and Devin Ciuci,`19 were staked out at the Biltmore Hotel in Downtown Providence.

When news broke about Sheldon Whitehouse’s reelection, amidst the cheering crowds, Wiligoos got an interview with Whitehouse, asking him for the top three things he plans to do for Rhode Island.

Pugliese tracked down Governor Gina Raimando to get the scoop on her plans, straight from the source.

"At this point in the night, when I was able to ask her my questions, our HawkTheVote live stream had ended almost an hour earlier," Pugliese says. "There was not a chance, however, that I was leaving the Biltmore until I had a chance to quickly interview Governor Raimondo. Our event may have been over, but my job as a journalist was not."

This year’s HawkTheVote Election Media Lab lived up to its award-winning name, proving just how much students can learn from an immersive, professional journalism experience like RWU’s. This hands-on experience with high quality research, collaboration, communication, networking, and technical production work will carry them far beyond their four years on campus and into a world of opportunities.

"It was a really incredible experience," says Pugliese. "I cannot wait to continue to work in this field after I graduate in May!"