Two alumni, one a scientist and one a designer, find opportunities to thrive in their fields at Twelve Guns Brewing, which opened in Bristol last month

What does working in the wet lab at RWU have in common with working in a brewery? A whole lot, according to Scott MacConnell, who majored in environmental chemistry and minored in marine biology and math.

MacConnell performed research on comparative extraction techniques looking at marine and lake sediment core samples. Through his work in the lab, MacConnell gained the confidence to work independently with high tech and expensive equipment. 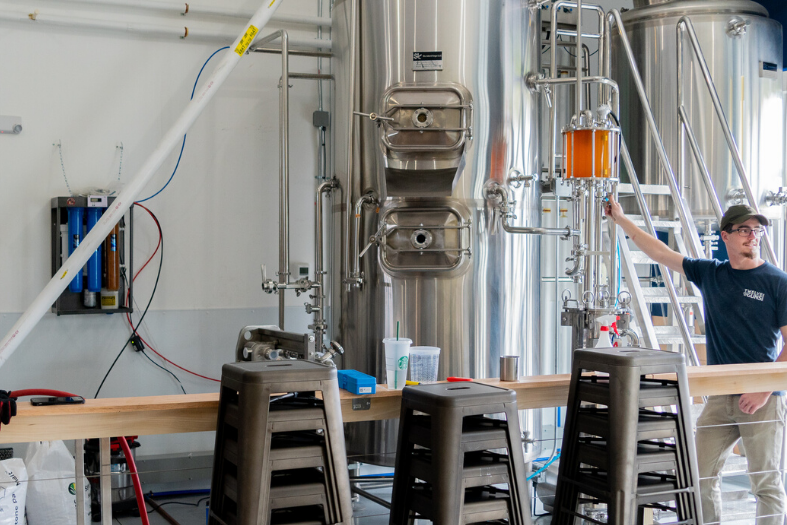 “It also taught me how to examine the story, or the relevant trends, that can often be hidden between large sets of data," said MacConnell.

After traveling to Europe his senior year as part of a course on the chemistry and culture of beer taught by Professor of Chemistry Cliff Timpson and Professor of Communications Robert Cole, MacConnell was inspired to apply his skills to a career in brewing. He landed his dream job as brewer at the newly opened Twelve Guns Brewing in Bristol.

"For Scott to have the opportunity to go to Belgium and Germany and London to see some of these breweries that have been around for hundreds of years and talk to the brewmasters, you could see he was really going to go far with it when he came back," Timpson said.

Now, MacConnell relies on the skills he gained in the science and math programs, along with the experiences he gained in Timpson and Cole's course, to do what he loves.

“One reason I loved labs was that we were usually making something, which I have always had a passion for,” MacConnell said. “Now I can share what I was able to make with a larger audience and see the smiles on my peers’ faces.” 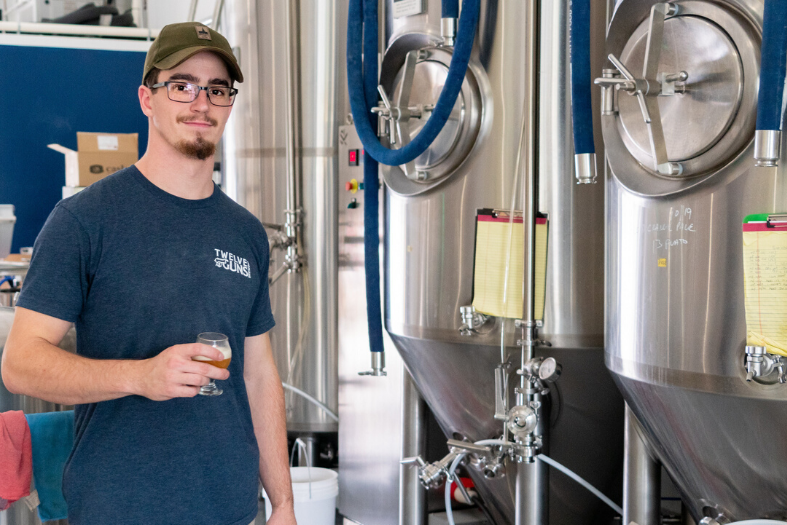 While science-minded RWU alumni can use their skills to make beer, artists are also finding a home for their work at Twelve Guns.

Take Tyler Luke, an architecture major with a minor in visual arts, who helped paint the nautical mural that greets guests when they first enter the brewery.

How did you come to be involved with the mural-painting at Twelve Guns?

I was introduced to the project by Michael Rich (Director of the Visual Arts department at RWU). Michael was the professor of nearly all of my visual arts classes and he really helped me shape and refine my voice as an artist. From there, Michael introduced me to Kyle of Twelve Guns Brewery where we began to survey how the mural will be executed. With this daunting task, I recruited one of my favorite artists and roommate for the duration of my undergrad, MacKenzie Lubin, to help in the planning and execution of the final product. Additionally, we had help from Daniel Perkins, a Roger Williams University History Major, to help with the factual basis of our composition. Without their sincere and constructive help, the mural would not have come to fruition.

What is the significance of the mural?

The mural is a representation of the U.S.S. Providence which was a sloop-of-war in the Rhode Island General Assembly during the American Revolutionary War. The U.S.S. Providence ran many successful campaigns during the war and was eventually sunk by their own crew in order to avoid falling into the hands of the British. The ship, also known as the Katy, yielded twelve guns for which the brewery was named after. In the final composition, we came to the conclusion of juxtaposing the blueprint of the ship with the ship in full sail to symbolize the development and realization of the development of America during and post-Revolutionary war. Furthermore, the choice of including both the blueprint and the final ship mirrored how the brewery was set up: pairing the exposed process of beer-making with the final product of the drink. Overall, we wanted to create a composition that was bold in execution and nuanced with significance. 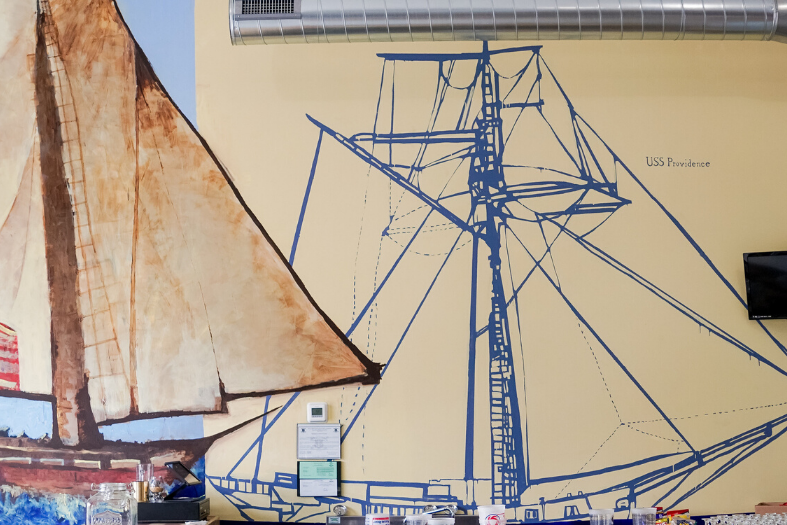 What has been most impactful about this experience?

The most impactful part of this experience was creating an idea on paper and then figuring out various techniques to actually get that idea onto the 15' x 25' wall. It was almost a puzzle in a way that was completely foreign to me and Mackenzie because we never really exceeded 3' x 3' with any of our previous pieces. These challenges were accepted with welcoming arms and the experience that we had was unforgettable because we both had to figure it out along the way. This ultimately made us better painters and designers throughout every step.