BUFFALO, N.Y. — Students from the Roger Williams School of Engineering, Computing, and Construction Management placed 4th of 13 teams in the Micromouse Competition at the Institute of Electrical and Electronics Engineers (IEEE) Region 1 Student Conference, held recently on the campus of the University at Buffalo.

The competition has students design, construct, and program an autonomous robot to solve a 16x16 square maze. The team that solves the maze quickest comes out on top; but in the event that the maze cannot be solved, the win goes to the team that traverses the most contiguous area of the maze.

The interdisciplinary team of RWU engineering students designed a small robot, which they named "WALL-E" (pictured below). It was composed of electrical sensors and components mounted to a 3D-printed mechanical platform, and engineered to travel along right-hand wall navigation. 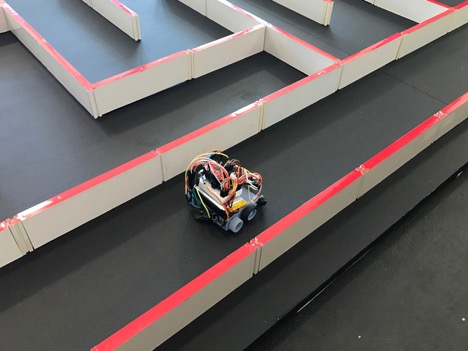