NEWPORT, R.I. – On a gusty Friday afternoon, four RWU engineering students stop at North America's largest coastal fortress for a visit. Though quite scenic, the students aren’t there for leisure. Instead, they put on their hard hats, grab their equipment and head into work.

Fort Adams, a National Historic Landmark built in the late 1700s, is preparing to host more guests for tours and events. In order to do so confidently, the fort needs to be structurally stable and safe. To determine if it is and how to prevent further deterioration of the fort, the Fort Adams Trust has tapped RWU's School of Engineering, Computing & Construction Management (SECCM). In partnership with RWU's Community Partnerships Center, SECCM has been working on the project since last year when seniors assessed a section of the Fort.

This year, another team of seniors are continuing the project. Through it they are gaining hands-on, professional experience that is preparing them to enter the workforce. The documents they provide, and the documents from the group before, will be used as a starting basis for future fort restoration plans.

Here are photos from the students' most recent site visit: 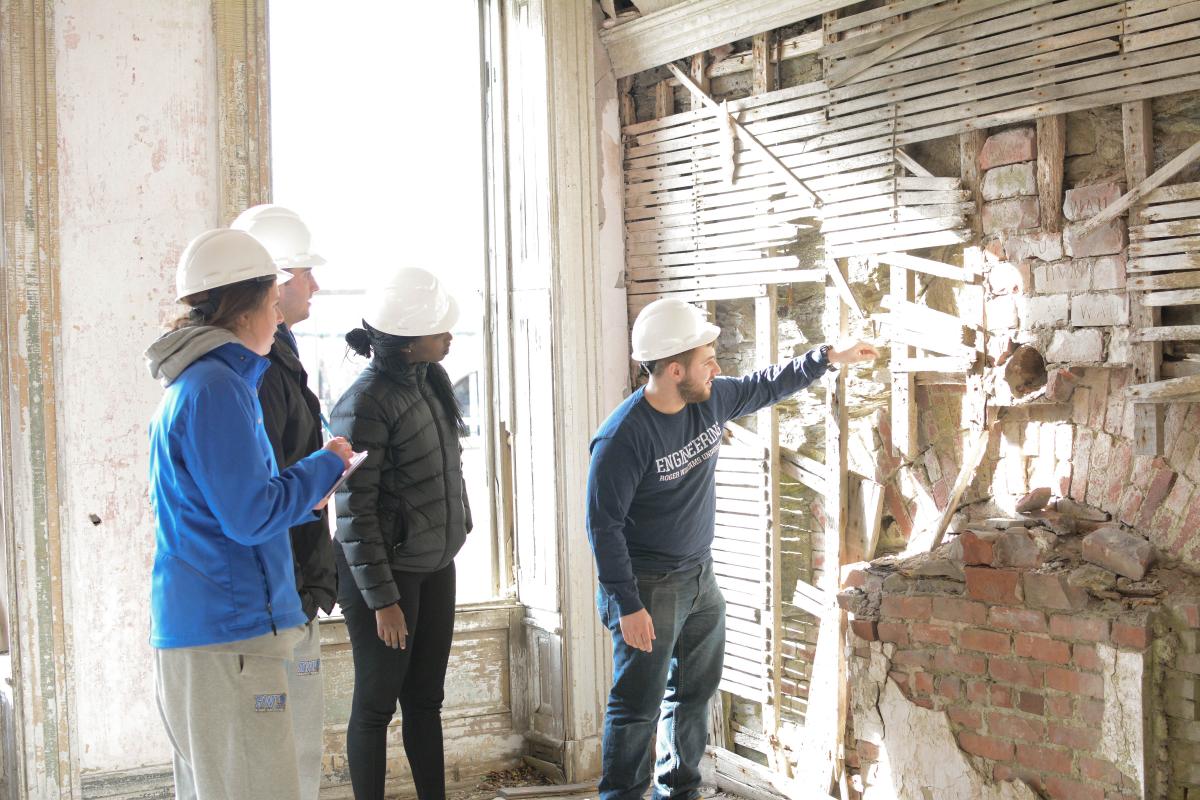 As part of their senior capstone project, the students are conducting a full structural analysis of the east wall at Fort Adams and designing temporary structures to prevent further deterioration of the fort. Here, the students inspect a portion of wall in a room that used to serve as captain's quarters. "It hasn’t been in insanely bad condition," said Joseph Sojka '17 as he examines a piece of wood. "As you can see these ceilings are falling, but all of this is just an outer coating."

"None of that stuff is actually structural," Jacob LePrevost '17, standing in the center behind Sojka, said, meaning it has no effect on what kind of weight, or load, the building can hold. 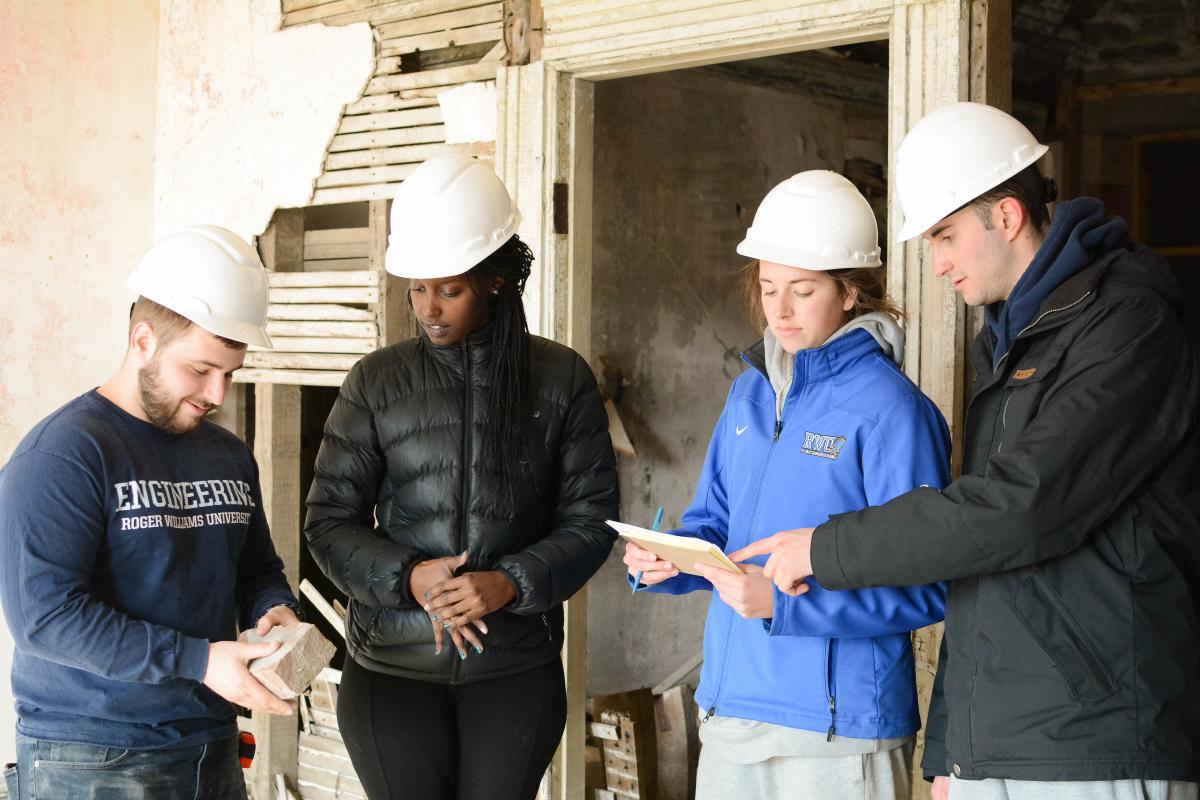 This year’s seniors – from left to right, Sojka, Alexia Byusa '17, McKenna Everding '17 and LePrevost – discuss what they observed in the room. So far, the team has completed a full existing conditions report for the east wall. The report includes a full room-by-room structural description and current structural design plans. They have also calculated up-to-date load designs – or how much weight a structure can hold – for that part of the fort. The students worked as a team and broke up the tasks to complete the report, gaining experience of what it’s like being a professional. "This is pretty much exactly what it would be like to work at a structural engineering firm," Everding said. "You have a client come to you with a problem and say 'we need to fix this; how do we fix this?'" And then you work as a team to figure it out, she added. 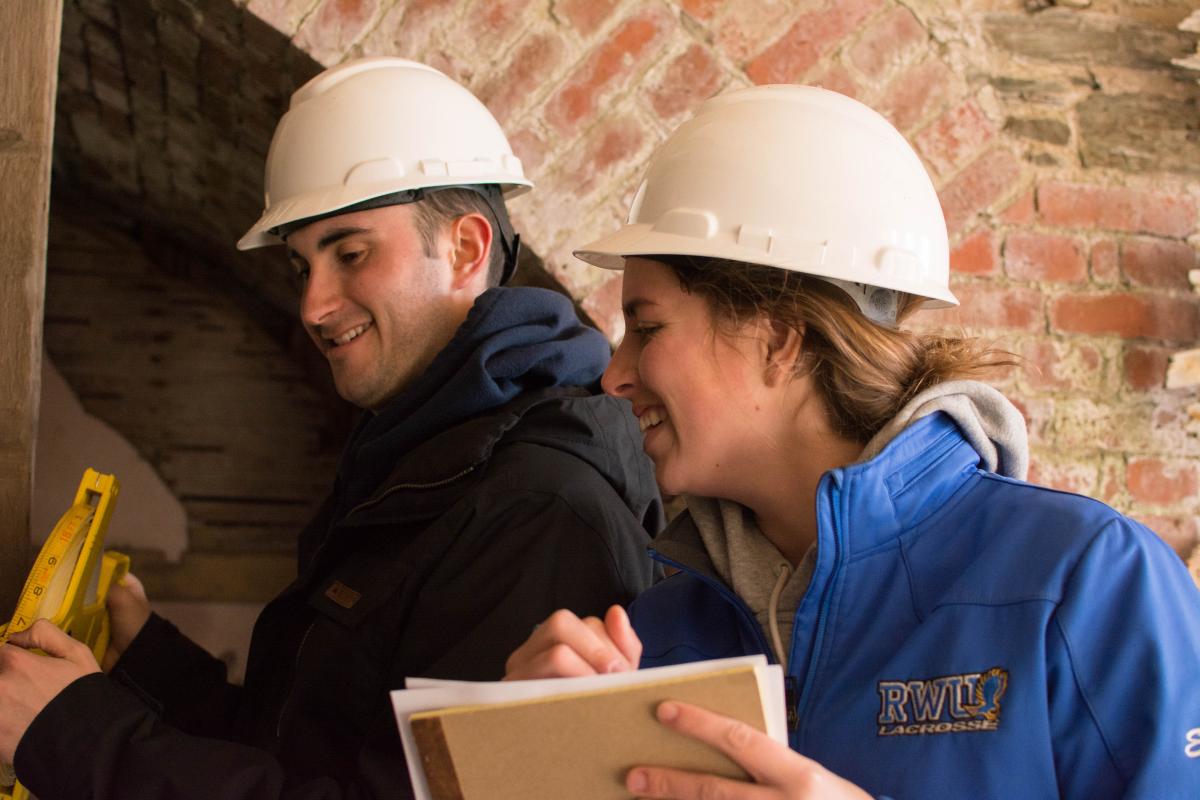 Through this project, students don't just focus on conceptual skills but build the practical skills needed in their field. In this photo, LePrevost measures the dimension from one wall to another while McKenna takes notes. The measurements taken during site visits served as the base to develop the floor plans for the fort and load calculations. LePrevost, McKenna and the other two students are a part of Professor Nicole Martino’s Senior Engineering Design Team, which serves as a way to expose students to real-world situations. "This project will be a significant portion of their academic portfolio, and an important talking point during job interviews," Martino said. "The project is a challenge that is very different from their traditional classes as there is not an available solution that they can check their answers with. They have to develop the solution." 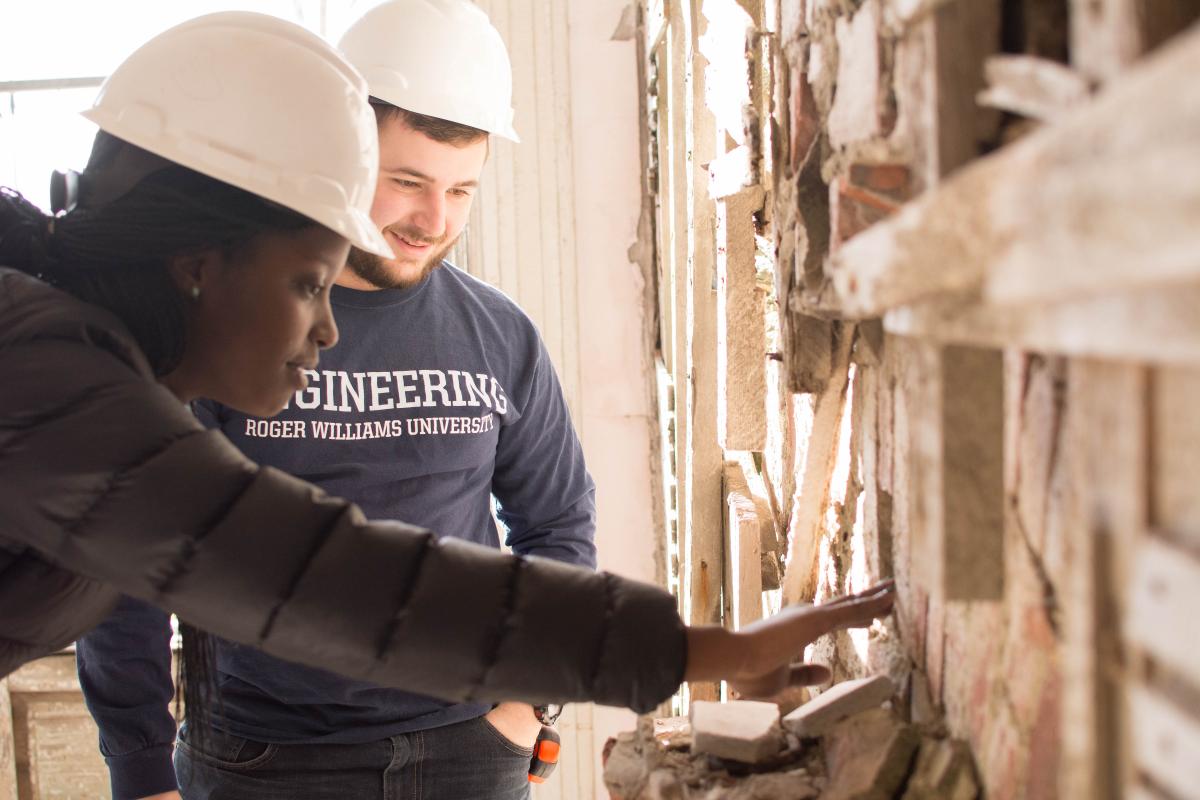 As Martino said, the project hasn’t been without its curve balls. The part of the fort the students are evaluating was constructed mainly with masonry, a material that is new for the students. "We had to research different ways that brick, or masonry, deteriorates," Byusa said. It was a good learning experience, the team felt. "You can do stuff in the classroom and on tests," LePrevost said. “You can do that stuff all day, but it’s never going to work out the way you thought when it comes to the real world. We’re definitely seeing that firsthand with the obstacles we’ve encountered with this project." 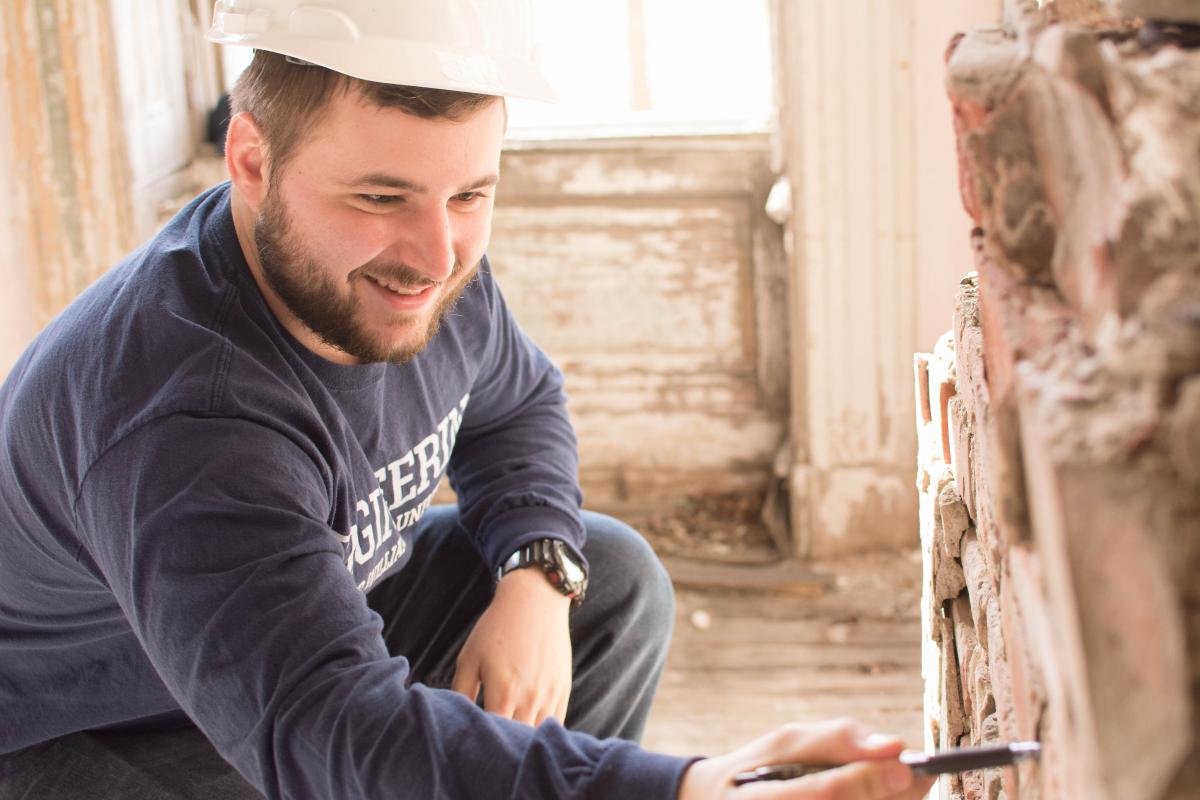 Here, Sojka inspects the mortar between the bricks for deterioration. "If it scrapes off real easily, that’s a big sign of structural deterioration," he said. Sojka led the project, took photos for the photo log and finalized the existing conditions report. "[The report contained] what we observed in each room, the problems, what might have caused them and then recommendations for improvement and making it safe and structurally sound," he said. 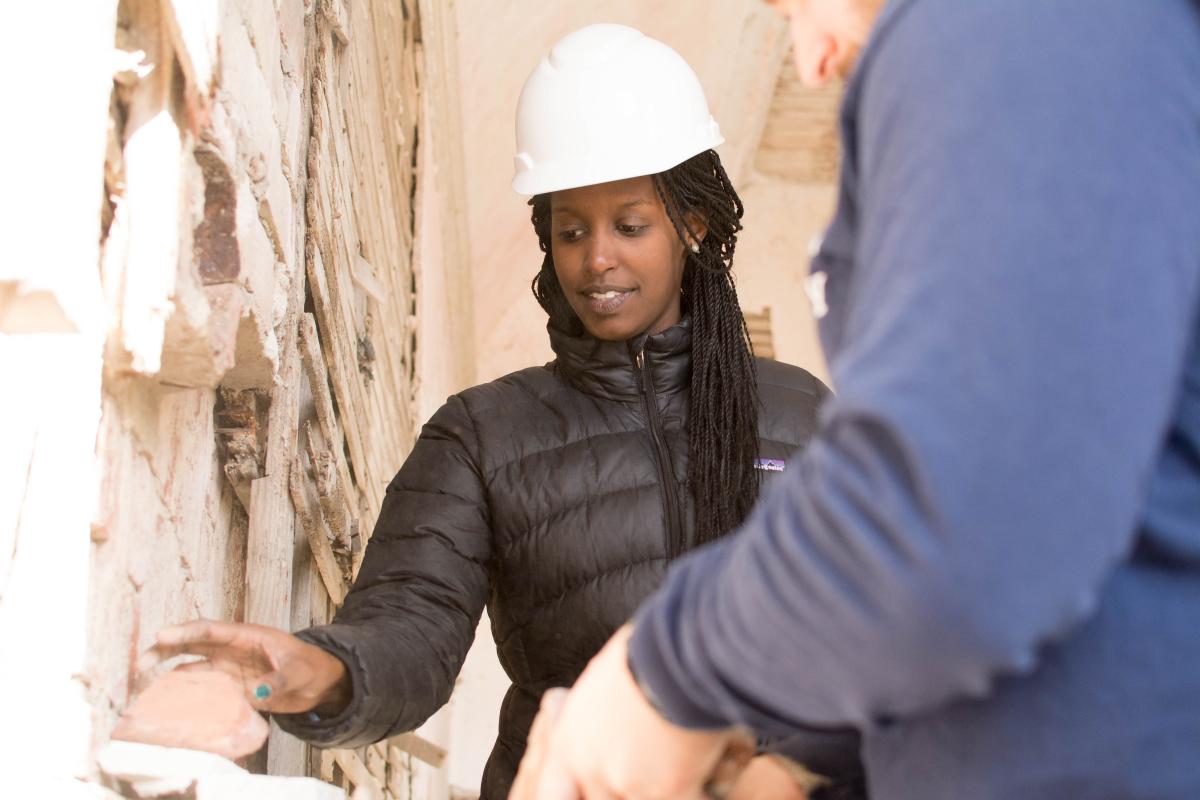 Byusa did much of the site evaluation reporting and research aspect of the project. For her, getting to work on a project that has real, tangible results is irreplaceable. "[Our project is] not theoretical," Byusa said. "It’s actually a real fort that was built and we’re working on it. It’s bigger than just what we are doing." In this photo, she and Sojka inspect bricks for deterioration. 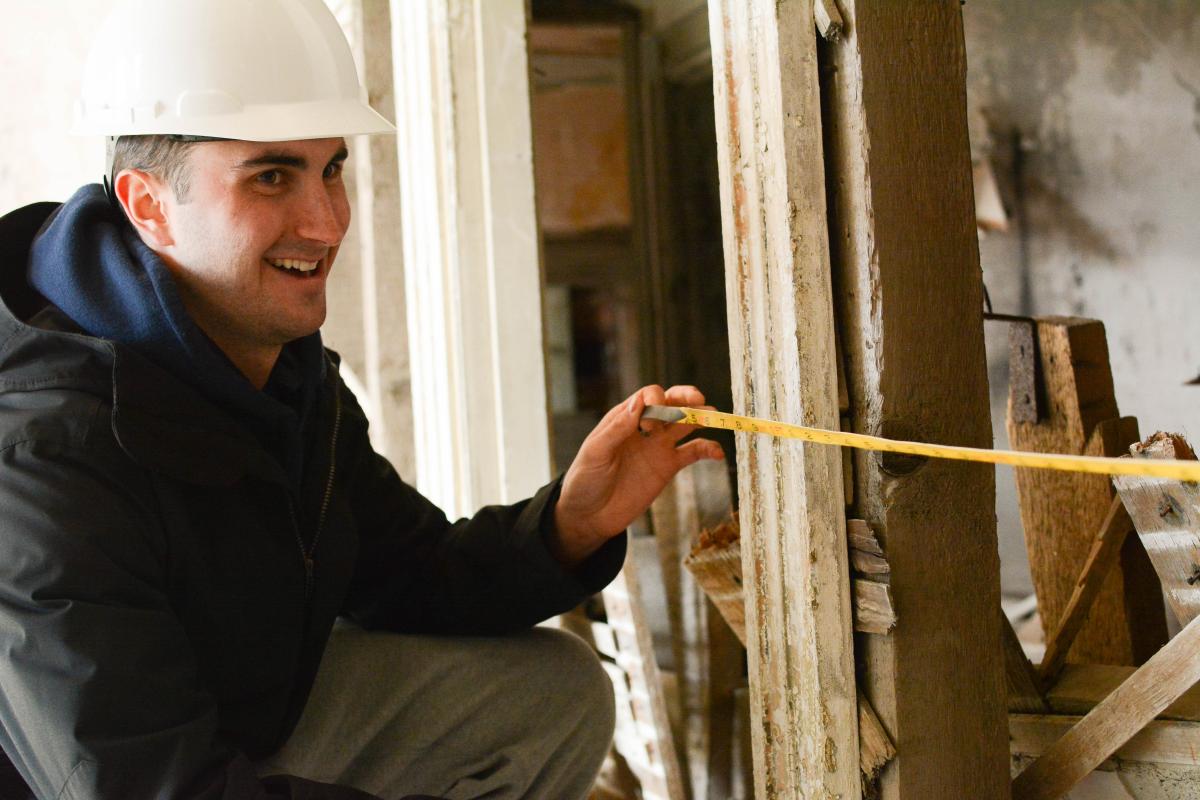 LePrevost, seen here measuring the space between a doorway, was responsible for using the photo log, structural dimensions and room sketches to create full floor plans for the east wall using AutoCAD, a mechanical engineering and design software. His experience with the project showed him why it’s so important for engineering projects to start with a set of structural plans. "You really can’t do anything until you have plans," he said. 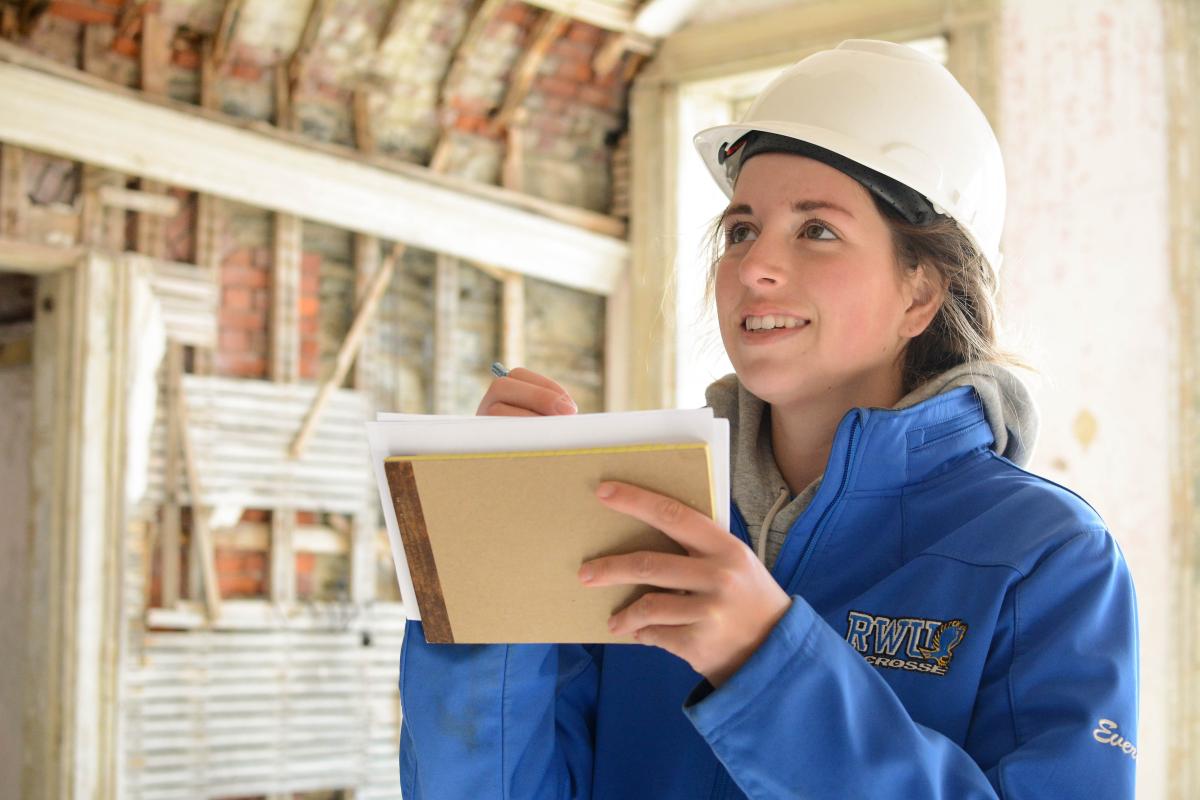 Everding, called Mac by the rest of the team, used the dimensions LePrevost provided as a base for calculations to determine how much weight, or load, Fort Adams’ east wall could hold. She then created formulas using the American Society of Civil Engineers 7-10 design load standards and some of its other provisions to calculate the vertical and horizontal load that the structural members of the east of wall should be able to withstand, she said. 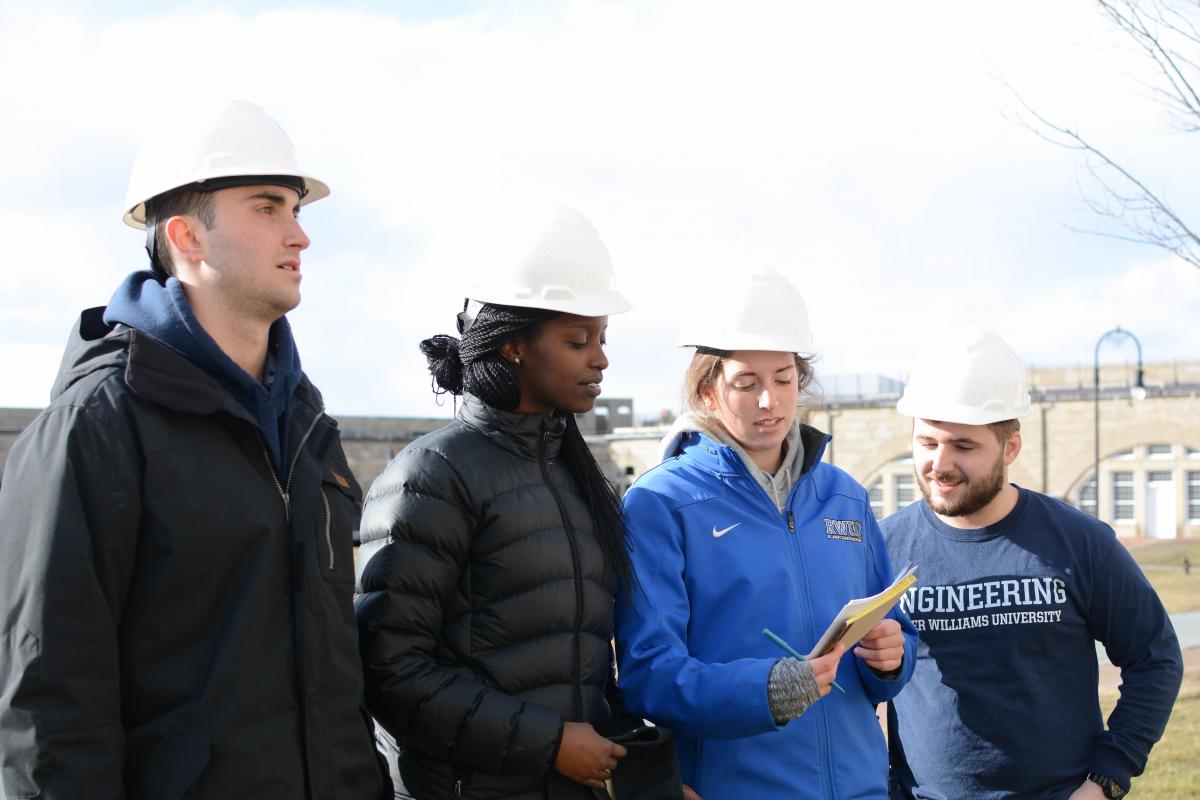 As the students study the exterior of the east wall, they know the work is far from done. Next, they plan to build upon what they have done so far. They will use the structural plans they have to build a 3-D model and then run simulations on how the east wall will act with the weight they believe will be applied to it from hosting events. By doing that they will be able to see the actual strength of the structural members of the east wall and how it compares to their calculations. They know the experience from this project will be invaluable in preparing them to enter the workforce, but they also recognize the value their work will bring to the community. "People want to see the area and learn about the history," Everding said. "To be able to do that you need to make sure this place is safe enough for them to do so."

The RWU Community Partnerships Center provides project-based assistance to nonprofit organizations, municipalities, government agencies and low and moderate income communities in Rhode Island and Southeastern Massachusetts. To learn more about how to get involved visit http://rwu.edu/about/partnerships-initiatives/cpc.