BRISTOL, R.I. – A team of undergraduate researchers are using mathematics to solve a knowledge gap, hunting clues to piece together exactly how a well-known treatment for Parkinson’s disease works inside the brain.

Think of them as the math detectives. They’re taking evidence from medical research and deploying advanced math equations and computer modeling to follow the trail of the unknown facts to answer how neurostimulation treatment – mild electrical pulses that patients barely feel – operates inside brain cells and why it gets the job done.

“I’m looking at how ions are affected by the electricity as it flows over the head from one point to another, and how the brain fluid changes as a result,” says Andrew Delsanto, a senior applied math and civil engineering double major. “Many studies have shown that neurostimulation alters cortical brain function, which governs motion, and that it essentially slowed down the movements of patients with Parkinson’s disease. We know it helps, but we don’t know how or why.”

If they can demonstrate which ions – calcium, chloride, potassium and sodium – are the ones most affected by neurostimulation, Delsanto says it could one day lead to solutions for the biomedical industry to find new or more targeted, effective treatments.

It’s a model of applying computational mathematics to address biomedical questions that originated with RWU Professor Edward Dougherty, who is leading the undergraduate research team’s efforts on this project, and his collaborator, James Turner of Virginia Tech.

“Math helps solve environmental questions and drives engineering projects, but it’s direct application in the medical field is limited in part because of the complexity of biological systems and challenges in biomedical testing and experimentation,” says Dougherty, an assistant professor of mathematics at Roger Williams. “If we can establish a model that works in tandem with the biomedical community, perhaps we can use computational math to address some of these questions the medical community is having difficulty answering.” 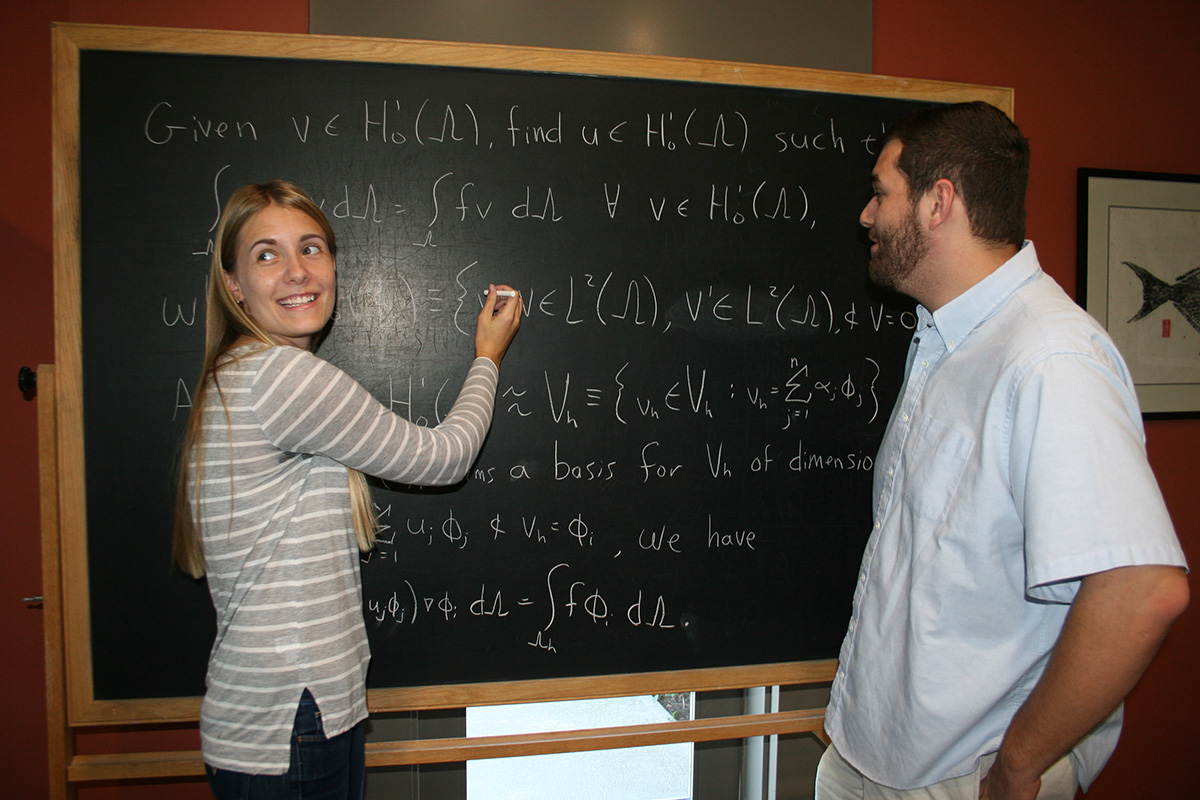 Each student is conducting individual research on the targeted ions, with the goal of merging together the puzzle pieces of medical research to demonstrate how all of the varying ion concentration levels interact and influence brain functioning – an effort no one else has done, Dougherty says.

While Delsanto is tracking extracellular ions, junior math major Kaia Lindberg is running simulations that model the ion current flowing in and out of brain cells as a result of neurostimulation. It may sound like a lot biology and chemistry, but their work is mostly steeped in programming code, navigating multiple sophisticated computer programs such as Python, FeniCS, Diffpack and Gmsh, and exploring graduate-level mathematics.

“We’re simulating that treatment and what we come up with are hundreds of results compiled in a video. The answers form a picture of ion concentrations changing over time and across the brain,” says Lindberg, who immersed herself in the project for 10 weeks as a Summer Undergraduate Research Fellow (SURF) through an RI-INBRE grant awarded to Professor Dougherty. “We can show how the neurostimulation moves the ions and how that affects the electrical potential energy of those ions.”

This video from their research shows sodium flowing across the cell wall and spreading throughout the outside and inside a cell.

Dougherty likens it to spraying an aerosol can into a corner of a room and observing how the liquid propagates out around the space. “When cells die in Parkinson’s disease, you lose the ability to move your extremities. But when you apply a stimulus like neurostimulation, that activity gets better,” he says. “My theory is that the only way that works is if these cells are communicating to each other, and the only way that’s happening is if the stimulus applied to the outside of the cell is affecting the ions on the inside of the cell as well.”

Their research may not lead to a cure for Parkinson’s disease, but it may play a role, by offering a new model of applying math to solve these biomedical knowledge gaps. In the meantime, it’s exposing the students to advanced math they wouldn’t typically see until graduate school and to collaborating with a faculty expert on innovative research.

“I’d love to see the research advance another 20 years and be able to say that in my undergrad, I was part of something big,” Delsanto says.