Marilyn, in His Own Words

Braver took some time from his whirlwind press tour – and gearing up for the new semester – to answer some questions about his latest literary project.

It really started as a challenge someone gave to me to do a story about her because this person was convinced that I would enjoy it and I was convinced I wouldn’t. It became a gentleman’s bet, almost. When I wrote it and started researching – I only knew the standard Wikipedia biography – I started to find her interesting as a character. She was a very complex person. I was probably attracted as a writer to the vulnerable side of her. So it made me interested – I found this character I was interested in and even though my book has some parts about her childhood I was really trying to find a defining moment and that’s where the work came in.

With such a volume of work published (and maybe unpublished) about Marilyn, how long did it take you to research and sift through or separate the useful from the useless?

I probably spent three to five years or so. A lot of it was sifting through research and part of it was I didn’t know enough about her. It took a lot of time because I had to find a story and I tried to stay away from as many biographies as I could because they all have a subjectivity about them that I didn’t buy into. Arthur Miller’s biography was useful because it didn’t tell me about her but about how people saw her. I read a lot of newspaper accounts, tabloids – the FBI files that are three inches thick about her.

What are the challenges of writing a work of fiction about a real person whose backstory is so well known and who is an American icon? 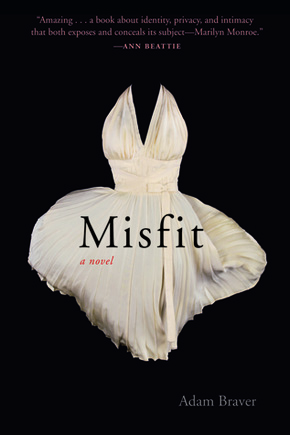 I think some of the challenges or things that become challenges to me is that there is a sense that people have of who the person is. I feel a certain freedom to go underneath, but there’s still a surface that everyone’s familiar with. I’m aware that people have a certain narrative in their own head. There are books where people create these fabulist stories – I’m not interested in that. I’m after questions from myself that are beyond who the person is, and the person becomes a vehicle to explore different ideas and different thoughts. I hope I’ve created an honest version of them.

Who is your Marilyn, and how is she different from the construct we’ve come to know through the kaleidoscope of history?

After spending this time in Marilyn’s shoes, do you feel you have any insight into who she may have been versus the myth our culture has perpetuated?

I see her as someone who I guess was smart not necessarily intellectual smart but she was smart about the world and actually smart enough to know she wasn’t intellectually smart and wanted to be. She would sneak out to take night classes at UCLA and was a voracious reader.

But her vulnerability did her in and her fears – her childhood well document mother and grandmother in mental hospital terrified it was going to happen to her. She had a little bit of a survivor instinct about her. I just got the feeling that she was a really good person at her core and maybe got herself in deeper than she was able to handle – and from my perspective everyone around her had an agenda. They found a way to take advantage of being close to her.

I kind of liked her.

I didn’t feel a need to protect her nor to prove her wrong. Not having a particular fascination didn’t put me in a position where I had to have my assumptions challenged or having to make decisions based on that. It was just the regular assumptions based on human behavior. It really allowed me to start with her as a human being and not as an icon. I suppose what I knew were some of the myths but didn’t have my own mythology of her. And some of the people I talked to clearly did and would go to the grave defending her or defending their version of her.

You employ more than one point of view in the novel. Why develop the narrative in this way?

It’s primarily third person and there’s one first person plural and then when it comes to her perspective it goes into a second person where we might have used an “I” first person. All I can tell you is that it happened naturally. And being my own literary critic or my own English professor, I might say that I instinctively knew that the “I” would feel a little disingenuous somehow and the close third person felt a little distant. Second person felt more intimate to me. When we were done there was a lot of discussion with my editor if it was gimmicky, and we tried shifting into first person and it didn’t have the same feeling. It felt more natural, and oddly enough should have been distancing but felt more intimate. I think I can get away with it because there are distinct sections and almost reads as short stories. I don’t know if it would have worked in a very linear narrative.

What draws you to historical fiction as a genre?

I think I’m most interested in the mythology of popular culture and that we’re instantly making our history all the time. And so I’m drawn to these moments that to me epitomize different parts of that mythology and trying to understand not so much about those events but why the world I live in is the way it is because of that event. I’m drawn to those big moments and the small moments in those big moments that fascinate us; and how they influence everything.

What are you working on next?

I’ve been researching about an Irish woman who was Dwight Eisenhower’s driver during World War II; they had a very unique relationship, much of which has been used as fodder over the years. She was the last person on earth who should have been there – the accidental witness to watching battle plans get made and the changing world. She was a volunteer, and she eventually became the first female officer but also traded some of this in on “my life with Eisenhower” books. Again, you never know what’s what of her going into meetings with him and Winston Churchill and the King of England and their saying, “well what do you think?” Eisenhower is hardly my bailiwick and way off my radar, but I find her interesting and this idea of close bonds being created in harrowing times.

For more on "Misfit" and other works by Adam Braver, visit www.adambraver.com.