Back to Back! University Earns ‘Best in Parade’ Honors for Second Year in a Row

Each year, the RWU Orientation advisors imagine a theme, design a float and construct it in time for Bristol’s famed Fourth of July festivities

Bristol, R.I. -- Revelers numbering in the hundreds of thousands spilled onto Hope and High streets in downtown Bristol yesterday to celebrate the 227th Bristol Fourth of July Parade, but only one team could capture the coveted Best in Parade honors – and for the second year in a row, that team comprised a group of spirited Orientation advisors from Roger Williams University.

“The theme this year is A Unique American Experience and our take on that is the Bristol Fourth of July celebration as a whole, from the carnival to the soap box races to everything else on the float,” Orientation advisor and float coordinator Kate Ford ’14 told ABC6 Providence. “And we’re incorporating from 1785 until now.” 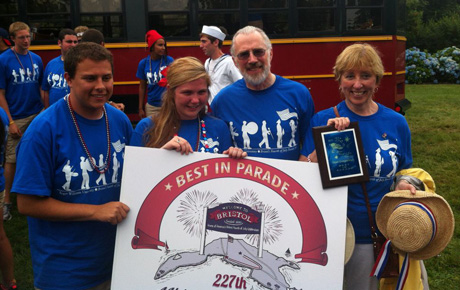 The award came during a festive weekend for the Orientation students and the countless other students, faculty and staff who celebrated with the Town of Bristol during the annual Fourth of July jubilee. The Orientation advisors completed the length of the parade route along with the award-winning float, cheering on spectators and celebrating with the University’s host community.

“To be a part of the world’s oldest Fourth of July parade is just really monumental for me,” float coordinator Dan Moran ’14 told the television station.

As part of its relationship with the Town of Bristol, Roger Williams has sponsored and participated in the annual Fourth of July celebration for decades. Since the early 1980s, the University has entered a student-designed and constructed float in the parade.

For more details on the RWU float, watch this news segment from ABC6 Providence.