BRISTOL, R.I. – After an extensive undertaking by eight Roger Williams University graduate students that culminated in an updated Historic Preservation Plan for the Town of Warren, the American Planning Association’s Rhode Island chapter honored the Town and the University with the 2011 Current Topic Award for Historic Preservation at the organization’s annual awards and holiday party held in Newport, R.I., last night.

“In addition to being an all-around well-developed plan, the Historic Preservation Plan for the Town of Warren is noted for its significant public input process and involvement as well as its consideration of the study area both as a district and for the individual structures within that district,” said Meredith E. Brady of APA Rhode Island, who chairs the organization’s awards committee.

The partnership between the Town of Warren and Roger Williams launched in January 2011, when eight students from the University’s graduate program in historic preservation – under the guidance of Arnold Robinson, director of the Community Partnerships Center at RWU – began the process of examining the Town’s historic assets, reviewing policies and actions aimed at preserving its historic structures and offering a new plan for preserving Warren’s historic architecture. 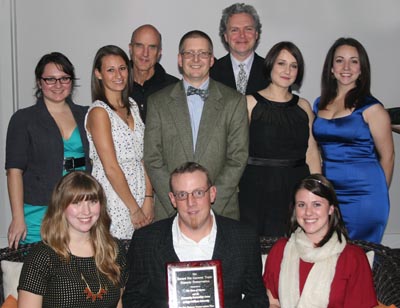 Last May, the students presented a 192-page Historic Preservation Plan to officials in Warren. The plan, which includes preservation, environmental and economic elements, will now be used as the town works toward a new Comprehensive Community Plan.

“The plan exemplifies the value that university/town partnerships can offer to local planning efforts,” Wells said in nominating the project for award consideration. “The quality of the historic plan is equivalent to that of a private consultant and could not have been completed without Roger Williams University’s resources and specifically, the expertise of Arnold Robinson and his students.”

In accepting the 2011 Current Topic Award for Historic Preservation, Robinson commended his students for their leadership on a project with a very tangible public impact:

“These students did an amazing job scoping the project – it was not given to them, so they had to work with their stakeholders and their project advisory committee. On their own, near the end of the project, the students decided that public input was crucial and put together a charette with about two weeks notice and had attendance of more than 100 people from the town working on historic preservation. They showed leadership, they showed guts in the implementation, and I know the Town of Warren is very happy to use this plan as they move forward.”