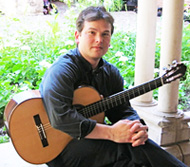 JOHN DENNEWITZ has been performing and teaching classical guitar since the early 1990's. He has delighted diverse audiences throughout New England as both a soloist and chamber musician with his musicality and passionate playing. In 2008, he performed as a member of the Providence Mandolin Orchestra in their summer European tour to France and the Netherlands.

In addition to performing, Mr. Dennewitz is the founder and director of Masters of Tomorrow, a Newport-based professional concert and student recital series that showcases well-known artists as well as promotes aspiring students. He holds a Master of Music from the New England Conservatory of Music where he studied with world-renowned classical guitarist Eliot Fisk. He also holds a Bachelors of Music degree from Rhode Island College. His other primary instructors have included Leo Amitrano and Mychal Gendron, and master classes with Oscar Ghiglia, Sharon Isbin, and David Leisner. In addition to teaching at the University of Rhode Island, Mr. Dennewitz is the classical guitar instructor at the Community College of Rhode Island, and mantains a private teaching studio.