In June 2011, Donald J. Farish, Ph.D., J.D., became the 10th president of Roger Williams University. He had a remarkable career that included 50 years of experience in higher education, serving as president of two universities, a full-time faculty member, esteemed educator, scientist and attorney. 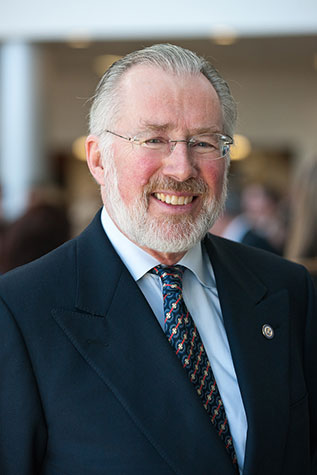 A native of Winnipeg, Manitoba, Canada, President Farish immigrated to the U.S. in 1963 to pursue his graduate education after receiving his bachelor’s degree in zoology from the University of British Columbia. He held a master of science degree in entomology from North Carolina State University, a Ph.D. in biology from Harvard University and a juris doctor from the University of Missouri. A respected scientist in his field, President Farish was the author of six biology textbooks and has authored and co-authored numerous articles on entomology and animal behavior.

A celebrated academic leader, President Farish guided the Roger Williams University community in articulating an agreed-upon identity that defines the distinctive elements of an RWU education. As a result of that conversation, he launched the Affordable Excellence initiative, which has positioned Roger Williams at the leading edge of the national dialogue regarding cost, debt and job-preparedness for today’s college graduates.

One of the most visible elements of Affordable Excellence is an expanding focus on meaningful experiential learning projects for students across the academic disciplines, many of which are facilitated through the Community Partnerships Center, created shortly after President Farish joined the University. Whether it’s students collaborating on research with faculty members or leading community-engaged projects themselves, he championed the Roger Williams mission to guarantee every qualified student hands-on learning opportunities that bridge theory and practice while helping to address problems for the local and global communities we serve. That philosophy of leveraging the expertise and energy of our students, faculty and staff toward the greater good is at the heart of what we do.

Via his President’s Blog and other community outreach efforts on both the local and national level, President Farish became a voice for the change he believed is needed to make higher education more relevant, more affordable and more accessible. In 2013, he was selected to lead the Executive Board of Rhode Island Campus Compact, a coalition of college and university representatives dedicated to supporting and expanding campus-based community service initiatives at schools across the state. He served on the governing boards for the New England Council and the Rhode Island Public Expenditure Council, among other organizations. He served as chairs of the boards of the Association of Independent Colleges and Universities of Rhode Island, and the Commonwealth Coast Athletic conference.

President Farish and his wife, Maia, were ardent supporters of arts, cultural, educational and social service organizations across Rhode Island, patrons of the Rhode Island Philharmonic Orchestra and committed to showcasing the performing and visual arts on campus.

President Farish joined Roger Williams following a 13-year post as president of Rowan University in Glassboro, N.J., where he transformed the respected regional institution into a world-class university known for its innovative academic programs. At Rowan, President Farish was responsible for the physical expansion of the campus, including the construction of new academic facilities for science, medicine, teacher education and technology research; almost 2,000 additional student residence beds to accommodate rapidly expanding enrollment; and a 26-acre downtown redevelopment project to connect the borough of Glassboro with the University.

Prior to assuming presidency of Rowan University in 1998, President Farish held academic and administrative positions at Sonoma State University, the University of Rhode Island and the University of Missouri. His commitment to shared governance has earned him a reputation as a collaborative and inspirational leader dedicated to preparing students for life in a just society, and to turning challenges into opportunities. A sought-after voice in higher education, President Farish served as one of 20 sitting presidents and chancellors at a July 2010 Presidential Roundtable organized in Washington, D.C., by the National Center for Public Policy and Higher Education to discuss the future of higher education in the U.S.