History of the Fulton Campus 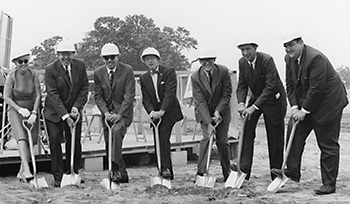 In 1875 Dr. and Mrs. Herbert Marshall Howe purchased much of the land on Bristol Point to establish a dairy farm named “Ferrycliffe.” At that time the end of Ferry Road was the departure point for the ferry to Aquidneck Island, and the farm was set above the prominent cliffs along its shoreline to the east overlooking Mount Hope Bay. Dairy farming thrived here for the next 80 years over three generations.

A successful industrialist, physician and accomplished artist from Philadelphia, Dr. Howe summered in Bristol and ran Ferrycliffe as a “gentleman farmer.” He lived with his family in a grand house, “The Homestead,” which he built across Ferry Road on a site now the residence of the Roger Williams University president. Ferrycliffe was a working dairy farm of prized Jersey cows – some imported from England – that won acclaim for their rich milk, cream and butter. The farm also produced sheep, pigs, chickens, extensive vegetable gardens as well as potato, corn, hayfields and orchards. Prized turkeys bred here included one that earned best-of-show in Madison Square Garden. Among the Jersey herd was an award-winning bull, Gilderoy, renowned throughout New England as a champion breeder. Ferrycliffe's brochure featured its top milk-yielding cows and directions by railroad, now the East Bay Bike Path, to bring cows to the farm for breeding.

Dr. Howe built homes on the point for his four daughters and, when he died in 1916, left Ferrycliffe in the care of his daughter Edith and her husband Dr. Halsey DeWolf. They in turn left it to their only child Mary Howe DeWolf, who married Dr. Marshall Nairne Fulton in 1940. By the early 1960s farming and milk production at Ferrycliffe had dwindled. Dr. and Mrs. Fulton resisted selling the farm for house lots and soon learned that Roger Williams Junior College, located in the Providence YMCA, was looking for a new location. They contacted Mr. Gerald Harrington, who was sitting president at the time, and in 1965 the College purchased 63 acres of land. On August 21, 1967, construction began on the original seven buildings. In 1992 the remaining 50 acres, including buildings and barns, were sold by the eight Fulton children to Roger Williams University to accommodate the growing institution.

Marshall Fulton, MD (1899 - 1977) was a “Renaissance Man” in every sense: a scholar, physician, gifted musician, teacher, civic leader and proud father of eight. Born in Keokuk, Iowa, and educated in its public schools, he came east to live with his uncle, Dr. Frank T. Fulton, and attend Brown University where he earned a Bachelor of Philosophy in 1920. He was also piano accompanist for the Brown Glee Club and played both piccolo and tuba in the marching band.  As a Rhodes Scholar at Oxford University's Merton College, he graduated with honors in physiology. He later earned his Doctor of Medicine from Johns Hopkins University and held positions at the Peter Bent Brigham Hospital in Boston and at Harvard Medical School.  During WWII he served in the U.S. Army Medical Corps at White Sulfur Springs, West Virginia. There he was General Dwight D. Eisenhower's personal physician upon the general's return from the European engagement. He returned to the private practice of Internal Medicine in Providence from 1946 to 1963, eventually as Chief of Medicine at Rhode Island Hospital. He served on volunteer boards and as administrator with numerous regional hospitals and national medical associations and was instrumental in the 1963 founding of the Brown University Medical School where he was promoted to Professor Emeritus.

His academic distinctions were also numerous. At Brown University he was Class Valedictorian in 1920, a Trustee and President of the Trustees Emeriti, an honorary degree recipient (Sc.D.) and Chief Marshall at its 1970 Commencement. He served on the Board of the Mary C. Wheeler School in Providence. He also served as a Trustee of Roger Williams College from 1971 to 1977.  He was admired and respected at Roger Williams for his perseverance, honesty, vision and optimistic spirit. After his death, the RWC Corporation voted on June 6, 1978, to rededicate the Bristol Campus in his name.

Mrs. Mary Howe DeWolf Fulton Shepherd (1917 - 2006), Dr. Howe’s granddaughter, said of her husband, “He loved Roger Williams and worked tirelessly to see it provide a quality education for its students.” Mrs. Fulton was also active at the College, serving as a member of its Corporation and Building Committee. She secured the stone bench at this site, commemorating the rededication of the campus in her husband's name and reading, “The Fulton Campus – Roger Williams College. Dedicated to Marshall Nairne Fulton who loved and worked for the vision.”

Today Dr. Howe’s earlier vision of maintaining Ferrycliffe as a productive, engaging waterfront community has become the pride of Roger Williams University and the Town of Bristol. It has revitalized Bristol's historic and cultural celebrity and become its number one employer. Its scenic and academic appeal has attracted many thousands of students. The Board of Trustees, alumni, faculty, staff, students and entire Roger Williams University community express gratitude to Dr. Fulton and his family for providing this land, the legacy of Ferrycliffe Farm and its beauty on Narragansett Bay for all to enjoy.

Portraits of Dr. Herbert Marshall Howe and his daughter Edith Howe DeWolf are permanently on display in the Roger Williams University Library.