RWU First-Generation Fridays is a series of 30-45 minute workshops every Friday at 3:30 p.m. for students who identify themselves as the first in their immediate family to seek a bachelor's degree.

First-Generation Fridays will offer information for students who are learning about the college admission process. All presenters are RWU community members who are passionate to share their personal college and career experiences, as well as best practices for those navigating it all for the first time. We encourage you to sign up for any and all sessions of interest and that best fit your needs. The last session of every month will be a 45-minute panel discussion with a Q&A. These workshops are free and are being delivered virtually at this time. We hope you are able to join us for a session in the near future!

All workshop sessions will cover different topics. Please find a session below to register for!

April 16: How to self-advocate as a first-generation student on a college campus

April 23: College seems out of my reach; how can I make it work

January 15: Scholarships, student loans and how to apply for them

January 22: Choosing a major as a first-generation student

February 19: Benefits of living on a college campus

March 5: How to get involved on a college campus as a first-generation student

March 19: Resources for first-generation college students and how to navigate through them

March 26: What is it like to live on a college campus as a first-generation student (panel discussion)

April 1: I was the first in my family to go to college

April 9: College enrollment, which is the best fit for me?

Missed a session and want to chat more about content? Please reach out to Tania. If you would like us to host a session at your school, please contact us to request a Speakers Bureau session to join your school virtually. 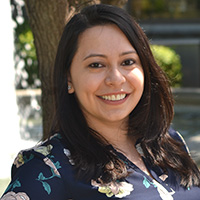 Tania is a South American native who is been living in the United States for over 20 years. She grew up in RI. She attended RWU and got her bachelor’s in Public Relations. During her time in college she got involved through community service by helping high school students find their find to a college. Currently, Tania works with students from Providence, Northern RI, Boston, and all Southern States to help them navigate the college application process. If you have any questions, please do not hesitate to contact her at thurtado@rwu.edu.