Dr. Jeremy M. Campbell is a political and environmental anthropologist whose work focuses on land conflicts, ecological change, and the state in the Brazilian Amazon. He is particularly interested in the ways people come to know their environment and how that knowledge becomes politicized in moments of broad and rapid socioeconomic changes. In Brazil, Campbell conducts ethnographic research on the forms of authority and place-making that local peoples improvise as the character of Amazonia shifts from that of an extractive frontier to a workshop for sustainability schemes. 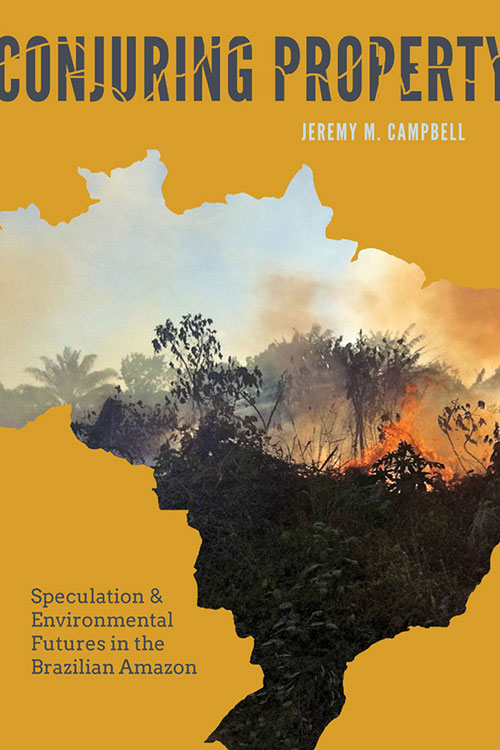 Campbell’s book, Conjuring Property: Speculation and Environmental Futures in the Brazilian Amazon, investigates the legacies of real estate swindles pursued to “develop” the world’s largest tropical forest. As an ethnographic study, this book explores what land and property means to colonists in the region as they work to make illicit acquisition of forest territories appear legitimate to one another and to authorities. Far from a stable category, property becomes salient through the dynamic and speculative actions of those that would render it visible in the forest: landless peasants, highly capitalized ranchers, bureaucrats, and traditional communities. Interdisciplinary in its approach, Conjuring Property contributes to development studies, conservation ecology, geography, and agrarian studies. The book was awarded the 2017 James M. Blaut Award for Cultural and Political Ecology from the American Association Geographers and honorable mention in the 2016 Book Prize from the Association for Political and Legal Anthropology.

Neighborliness and Anti-Dam Activism in Amazonian Landscapes: This project tracks the interactions between indigenous and non-indigenous rural communities as they collaborate to confront the development of hydroelectric projects in the Tapajós Valley. Campbell is developing new approaches to understanding common approaches pursued by diverse communities to territorial and ecological threats.

The Politics and Environmental Effects of Informal Gold-Mining: In collaboration with Brazilian and European colleagues (and with the support of the National Geographic Society), Campbell is investigating how a low-tech gold boom characterized by migrant labor currently underway in Amazonia contrasts with the formal mining industry, backed by political elites and multinational corporations.

Valuation and Recognition in Conservation Strategy. This research investigates how social histories and ecological/economic relationships become problematized in debates over the creation and maintenance of conservation units in rural sections of the Brazilian Amazon. Among the concerns that Campbell is drawn to explore is how conservation debates provide opportunities for political organization among socially-marginalized groups—including “renascent” indigenous groups and communities descendant from runaway slaves.

(2012) Between the Material and the Figural Road: The Incompleteness of Colonial Geographies in Amazonia. Mobilities 7(4): 481-500.

Campbell is the Secretary-Treasurer (elected) of the international scholarly association SALSA: Society for the Anthropology of Lowland South America, member of the Editorial Board of the Journal of Latin American and Caribbean Anthropology, and member of the Grupo de Estudos de Ecologia Histórica e Política nas Bacias do Trombetas, Tapajós e Xingu (GEEHeP) at the Federal University of Western Pará (UFOPA) in Santarém, Brazil.