Deborah A. Robinson, Ph.D.Professor of English

Looking at the courses I teach, some might say my literary interests are either eclectic or unfocused. In fact, the thematic thread that links these classes and fuels my passion is not located in a single period or genre, but rather in the mythological and symbolic processes inherent in all literature. What draws me to literature is its documentation of the vibrant creativity of the human imagination, especially our ability to construct abstract ideas and stories from the "stuff" of the concrete world around us in an attempt to order it, to explain and justify our existence. Homer's Iliad, Tolkien's Hobbit, a Native American creation myth, or Christine de Pizan's Book of the City of Ladies each stands as a cultural artifact, echoing at once the cosmology and ethos of the distinct culture that created it but also documenting the humanity that links us all across time and cultures. My interests in all things mythic and symbolic create comparative, interdisciplinary, and cross-cultural courses, including Native American, ancient Greek, medieval/Arthurian, Renaissance, Shakespearean, religious, and most definitely, women's literature from ancient to modern. Who we are is derived from where, as human beings, we have been. To study literature is to know our historical past, our present, our very selves.

For me, this philosophy leads to adventures beyond the classroom, adventures which make the written word come alive with traditions and voices, both past and present. At my home, whether dining on "roast beast" at the annual Victorian Christmas, or eating with our fingers at the Shakespearean Dinner, or sipping tea at the Spring Garden Tea, or whether traveling to King Richard's Faire in Carver, Mass. or to The Cloisters in N.Y.C., students, at least for a short while, bring both the literature and its history to life! To learn more about our events click on the Happenings. We also take those same experiences across "the Pond," as the English and Psychology Majors study together in London during Winter Intersessions where I've offered courses in The British Mystery and The Medieval Romance. In the past, I have traveled with fellow faculty members and students for six weeks in Greece discovering the land of Hesiod and Aristophanes and reading Homer's Odyssey at the very gates to the ancient Underworld. We are now looking forward to study abroad in Rome within the next two years. 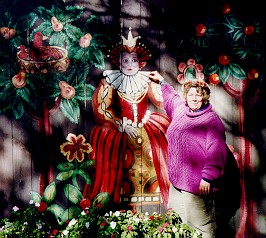 Myth, Fantasy, and the Imagination Class Along with the Elizabethan Society, the English majors' club, I also founded and serve as co-advisor for the Sigma Tau Delta International English Honor Society's RWU chapter which celebrates its tenth-year anniversary next year. This spring I attended the annual conference in Savannah, Georgia, with three students who presented papers on "'The Evil that [Wo]Men Do': An Interrogatory." In addition to presenting several conference papers on ancient, medieval, and contemporary literature, I have studied Chaucer, Shakespeare and the 19th-Century British Novel at England's Oxford University.

When not teaching, I love to garden and commune with all things natural, study anthropology and archeology, read, sail, and travel, as well as guest lecture on the history of women to a variety of groups including talks to the Environmental Protection Agency on the early religion of the Great Goddess-Mother Creator which revered the natural world. I am currently working to complete an anthology, Women Across Time: A Documentary, History, on the images of women from prehistoric through the Renaissance.