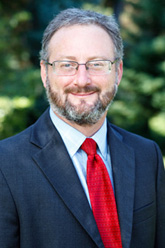 After 19 years at Mills College in Oakland, Calif., Andrew A. Workman, Ph.D., joined Roger Williams University as provost and senior vice president in July 2012. He serves as a key member of the senior administrative team and oversees all academic affairs responsibilities for the University.

Dr. Workman joined Mills College in 1993 as assistant professor of history, serving as a full-time faculty member – and eventual chair of the department of history – until 2002. That year, he accepted his first administrative position, becoming dean of social sciences. He subsequently advanced to associate dean of academic planning and development and then associate provost for academic affairs.

As vice provost starting in 2007, Dr. Workman led a five-year undertaking to transform the school’s first-year experience and advising programs – an effort that resulted in a 10 percent increase in first- to second-year retention rate – as well as a taskforce that overhauled the College’s tuition, financial aid and recruitment strategy and increased enrollment and tuition revenue by more than 25 percent. Dr. Workman played a lead role in doubling the number faculty research proposals at Mills and increasing total sponsored research from $8 million to $20 million. In addition, he expanded academic support resources for undergraduates, creating a peer tutoring program and integrating it with writing and testing to form a new Center for Academic Excellence.

With a bachelor’s degree in philosophy and social theory earned in 1983 from New College of Florida, Dr. Workman holds both master’s and doctoral degrees in history from the University of North Carolina, Chapel Hill.

He is an accomplished researcher with an extensive list of published works, many focused on history and policy from the United States during the President Franklin D. Roosevelt era. His teaching and research fields include 20th century U.S. history; intellectuals and public policy; labor history; African American history since Emancipation; and the history of the U.S. Supreme Court.

A community servant and engaged member of the Oakland community, Dr. Workman co-led Words that Made America, a program for teaching history in two Northern California school districts. He is also founder and director of the Oakland Living History Program, which partners with community groups to produce oral histories on the city’s neighborhoods and communities.

Dr. Workman was named to the inaugural cohort of the Council of Independent Colleges and American Academic Leadership Institute Senior Leadership Academy in 2010-11. In 2005, he earned the Phi Beta Kappa Northern California Association Award for Teaching Excellence.